Sometimes science moves very fast, and sometimes not so fast. The search for a cure for diabetes shows us both kinds of scientific progress.

Diabetes is a disorder affecting 15 million Americans and 250 million people worldwide in which the body’s cells fail to take up glucose from the blood. Tissues waste away as glucose-starved cells are forced to consume their own protein. Diabetes is the leading cause of kidney failure, blindness, and amputation among adults.

Some 15% of diabetes patients suffer from type 1 or juvenile diabetes, in which an individual cannot take up glucose because he or she lacks the hormone insulin. What has insulin got to do with inability to take up glucose from the blood? Your body manufactures insulin after a meal as a way to alert cells that higher levels of glucose are coming soon. The insulin signal is manufactured by islet cells in the pancreas. Travelling through the blood, it arrives at muscle and other cells, and attaches to special receptors on the cell surfaces. The cells react to this “heads up” by turning on their glucose-transporting machinery. Just as you can’t start a car without inserting the key into the ignition switch, so a cell cannot start transport glucose in from the blood until the insulin “key” has been inserted into its insulin receptors.

In juvenile diabetes, the immune system mistakenly attacks and removes the islet cells that manufacture insulin in the pancreas. Lacking these islet cells, the individuals must take injections of insulin after eating to maintain a normal metabolism.

A cure for Juvenile diabetes may be in the offing. The most direct approach to a cure would be to contribute new healthy islet cells to the patient. This sometimes works, but success rates have been a disappointingly low 8 percent. Thus researchers were riveted when last month a Canadian team in Edmonton reported that transplanting a cocktail of anti-rejection drugs along with the islet cells had cured Canadian patients of juvenile diabetes with a high rate of success. The drugs prevent the patients’ immune systems from attacking the new islet cells.

Now the federal government is launching a crash program to see if this result can be repeated. Researchers at Washington University, led by Dr. Kenneth Polansky, will join efforts at nine other research centers to reproduce and extend the promising Canadian results. Dr. Polansky’s team must be very excited at the opportunity to make such a tangible impact on human suffering.

Unfortunately, the picture is not so bright for the 85% of diabetics who suffer from type 2 diabetes. These individuals have normal or even elevated levels of insulin in their blood, but still don’t take up glucose.

The insulin signal somehow isn’t getting the job done. For 30 years researchers have been trying to figure out why. Fully 90% of those who develop type 2 diabetes are 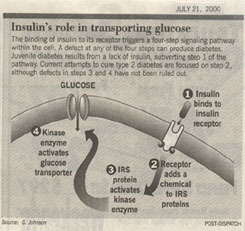 obese, a tantalizing clue. The simplest hypothesis to explain the lack of sensitivity to insulin among type 2 diabetics is that they have somehow lost their insulin receptors — insulin keys can’t do their job if there are no locks to unlock.

But simplicity is not always the parent of truth. Researchers found in the mid-1990s that type 2 diabetics had normal insulin receptors.

Researchers then began to examine more closely how insulin acts to turn on a cell’s glucose transporting machinery. They found that two proteins called IRS-1 and IRS-2 (the names refer not to taxes, but to insulin receptor substrate) snuggle up against the insulin receptor inside the cell. When insulin inserts into the receptor protein, its presence causes the receptor to add a chemical called a phosphate group onto each of the IRS molecules. Like being touched with a red hot poker, this galvanizes the IRS molecules into action. Dashing about, they activate a variety of processes, including an enzyme that turns on the glucose transporter machinery.

Are defects in the IRS proteins responsible for type 2 diabetes? Maybe. When the IRS genes are deliberately taken out of action in so-called “knockout” mice, type 2 diabetes results. Also supporting this view is the recent finding that high blood levels of fatty acids (a common result of obesity) interfere with the IRS-1 signalling pathway, preventing it from activating the glucose transporter in muscle cells. This would explain why obese people so frequently develop type 2 diabetes.

Don’t bet the farm, however. When researchers look for IRS gene mutations in inherited type 2 diabetics, they don’t find them. So while pharmaceutical companies like Merck and American Home Products are rushing to develop an enzyme drug that turns on the IRS pathways more efficiently, researchers are still pounding away at the problem, striving to clarify the picture. Until we know what’s broke, its difficult to know how to fix it.