What is a scientist to make of UFO sightings by reasonable people?

Have you ever sat on a roof on a cold December night looking up into the sky for flying reindeer? I have. Many readers have asked what happened that Christmas eve when I and my daughter Caitlin set out to scientifically test the theory of Santa Clause. Well, the bells on the roof jingled. They jingled off and on all night, however, and however often I was sent to go look, I saw no reindeer.

It has occurred to me several times, thinking over that night, that what was really wrong with this attempt to detect Rudolph and Prancer at work was that it was me up on the roof, not Caitlin. Any kid could have told me that adults can’t see leprechauns, Peter Pan, or other magical personages. Maybe imagination just dies with age, matured out of us like baby teeth.

Imagine my delight, then, to read in the newspaper on a recent morning that my surmise about only kids being able to see the magical is in error. It appears clear from what I read that imagination does not atrophy with age after all. Adults too can see with imagination’s eyes, at least in Illinois.

I am referring, of course, to the sighting of a UFO in nearby Illinois early one morning two weeks ago. It flew over Melvin Noll’s miniature golf course about 4 a.m., the morning of January 4. Flew is perhaps too strong a word. It wasn’t moving fast at all. Floated might be more like it. Melvin says he saw rows of windows. “It was all lighted up and so low that someone could have waved at me out the windows.”

Melvin, after digesting this unusual sight for a few minutes, lit out for the local police station at Highland, Illinois. The dispatcher called the police in Lebanon — it was headed that way — and they saw it too. Later, as it moved west, so did other police. In addition to Melvin Noll, four Metro East police officers filed reports of seeing the object in the sky as it passed Lebanon, Shiloh, Millstadt, and Dupo. At least two civilians have also reported seeing the object as they drove to work early that morning.

I can think of three ways to account for Melvin’s UFO. First, its all some sort of joke or hysteria, and there was in fact nothing real floating over Melvin and his miniature golf course. This doesn’t seem to me a likely explanation. Four independent police reports are no casual bit of nonsense, no encounter of the “after the bar closed” kind. Police are high quality observers, neither delusional nor fanciful. And the police that saw the UFO did not think it a joke. Indeed, two of the officers contacted the National UFO Reporting Center in Seattle the morning after the sighting.

Second, Melvin’s UFO might be some sort of novel military craft, not known to the general public. The police witnesses told reporters the object resembled a drawing of a “stealth blimp” that appeared recently in Popular Mechanics magazine. Was it an experimental military aircraft? There is no radar track to confirm or disprove — the air traffic control tower at Scott Air Force Base was shut down at the time. The government denies all knowledge of any such craft. Still, this is where I would bet my money. 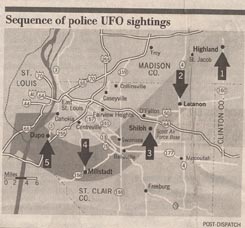 Third, Melvin’s UFO might be a UFO. All those windows and brilliant glaring lights don’t sound like any blimp I ever heard of. How could a blimp generate enough power? But if it wasn’t a blimp, what was it? Sherlock Holmes said that when you have eliminated the impossible, what remains, however improbable, must be true. I suspect Homes would vote for the UFO.

A particularly interesting thing about Melvin’s UFO becomes clear if you plot the five confirmed reports of police sightings on a map. The sightings move south and west on a slow swooping curve aimed right at — St. Louis! The thought of just what in St. Louis is attracting UFOs beggars the imagination.

So, bottom line, are there UFOs? I am not about to write a column saying “No, Virginia, there are no UFOs,” for the same reason I will never write a column saying there is no Santa. UFOs, like Santa, are real for those able to see them. Kids don’t see UFOs, and adults don’t see Santa. The window of imagination opens differently for us than for our children, but no less vividly.

Of course as a scientist I don’t accept UFOs as anything more than highly unlikely, sort of in the same category as Santa Clause and jackalopes. But I myself have seen a jackalope, and I am personally acquainted with very together kids who say they have seen Santa.

So I live quite comfortably in a world where reasonable people see UFOs. I can no more imagine a world without UFOs than one without Santa. If there were one, I suspect it would be a drab grey place, with no “X files,” no “MEN IN BLACK,” no “INDEPENDENCE DAY.” I wouldn’t want to live there.