When President Richard Nixon initiated the War on Cancer in 1972, we did not know very much about the causes of cancer, although many Americans were dying of it. In the 27 years since then, we have learned a lot. We now have a clear idea of how our body’s cells make the decision to divide, and of how damage to this decision-making process leads to cancer.

While cancer is a complex process, its general character turns out to be quite straightforward. Two sorts of damage must occur to produce cancer. As a crude analogy, imagine a car parked on the side of a road. To get it moving, you must step on the accelerator and release the brake.

Stepping on the accelerator. A cell divides when it receives a signal to do so, often a command issued by another cell. The key to understanding the decision to divide is to follow the information as it moves from the surface of the cell inward towards the nucleus where the decision is taken. A variety of proteins are involved in this journey, first receiving a “divide” signal, then passing it through the cell interior to the nucleus. As a group, the genes encoding these proteins cause cancer if changed by mutation to become more active. Like stepping on the accelerator of a car, increasing the activity of these genes amplifies the “Lets divide!” signal, causing the cell to divide more often.

1. Receiving the signal to divide. The first step in the decision process is the reception of a “divide” signal, usually a small protein called a growth factor released from a neighboring cell. The growth factor is received by a special receptor on the cell surface. Changes in genes (mutations) that increase the number of receptors on the cell surface amplify the division signal by providing more targets for growth factor molecules. Cancer results. Over 20% of breast cancers prove to overproduce the receptor for epidermal growth factor (EGF).

2. The relay switch. The second step in the decision process is the passage of the “divide” signal into the cell’s interior by a protein called Ras that acts as a relay switch. When growth factor binds to a receptor like EGF, the adjacent Ras protein acts like it has been “goosed,” contorting into a new shape. This new shape is chemically active, and initiates a chain of reactions that passes the “divide” signal inward toward the nucleus. Mutated forms of the Ras protein behave like a relay switch stuck in the “ON” position, continually instructing the cell to divide when it should not. 30% of all cancers have a mutant form of Ras.

3. Amplifying the signal. The third step in the decision process is the amplification of the signal within the cell interior. Just as a TV signal needs to be amplified in order to be received at a distance, so a “divide” signal must be amplified if it is to reach the nucleus at the center of the cell, a very long journey at a molecular scale. Cells use an ingenious trick to amplify the signal. Ras, when “ON,” acts as a enzyme, a protein kinase. It activates other protein kinases that in their turn activate still others. The trick is that once a protein kinase enzyme is activated, it goes to work like a demon, activating hoards of others every second! And each and every one it activates behaves the same way too, activating still more, in a cascade of ever-widening effect. At each stage of the relay, the signal is amplified thousands-fold. Mutations in any of the protein kinases can dangerously increase the already amplified signal and lead to cancer. 5% of all cancers, for example, have a mutant form of the protein kinase Src. 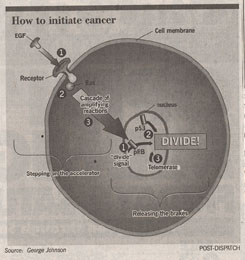 1. Unleashing the copy signal. In healthy cells the primary brake on cell division is a tumor suppressor protein called pRB. pRB acts by blocking the signal which directs the cell to copy its DNA. Normal cell division is triggered to begin when pRB is inhibited, unleashing the “copy” signal. Mutations which destroy pRB release the signal from its control completely, leading to ceaseless cell division. 40% of all cancers have a defective form of pRB.

2. Killing the guardian angel. Before it divides, a healthy cell checks to ensure that it’s DNA is undamaged. This job is carried out by a remarkable tumor suppressor protein called p53, sometimes called the “Guardian Angel” of the cell. p53 inspects the DNA, and when it detects damaged DNA it stops cell division and activates the cell’s DNA repair systems. If the damage doesn’t get repaired in a reasonable time, p53 pulls the plug, triggering events that kill the cell. In this way, mutations such as those that cause cancer are either repaired or the cells containing them eliminated. If p53 is itself destroyed by mutation, future damage accumulates unrepaired. Among this damage are mutations that lead to cancer, mutations that would have been repaired by a healthy p53. Over 50% of all cancers have a disabled p53. Fully 80% of lung cancers have a mutant inactive p53 the chemical benzo (a) pyrene in cigarette smoke is a potent mutangen of the p53 gene.

3. Removing the limit on a cell’s life span. In healthy cells another tumor suppressor inhibits production of a special enzyme called telomerase. Without this enzyme, a cell’s chromosomes loose material from their tips, called telomeres. Every time a chromosome is copied as the cell prepares to divide, more of the tip is lost. After some thirty divisions, so much is lost that copying is no longer possible. Cells in the tissues of an adult human have typically undergone twenty five or more divisions. Cancer can’t get very far with only the five remaining cell divisions, so inhibiting telomerase is a very effective natural brake on the cancer process. Any mutation that destroys this telomerase inhibitor releases that brake, making cancer possible. It is thought that almost all cancers involve such a release of telomerase production.

This knowledge about how cancer is caused, obtained in many dozens of laboratories, is at last providing researchers with the weapons we need to attempt to cure cancer.