Like gossip, a juicy scientific hypothesis doesn’t die easy. There has been a dilly percolating through the scientific community this last year, a suggestion at once horrifying and plausable. It has been suggested that a vaccine caused AIDS.

This is not as silly an idea as it might at first appear. To understand its peculiar force, lets quickly review what science knows about the origin of AIDS.

1. Despite loud claims to the contrary made by the lunatic fringe, the evidence is absolutely solid that AIDS is caused by a virus, human immuno-deficiency virus, HIV for short.

2. When scientists analyzed the DNA sequence of HIV, it turned out to be quite similar to the DNA sequences of viruses found in African monkeys and chimpanzees, the so-called simian immuno-deficiency viruses (SIV). The most common human AIDS virus, HIV-1, is so startlingly similar to the chimpanzee version of SIV that essentially all researchers agree the human virus must have arisen from the ape one.

3. While the AIDS epidemic began in this country in 1981, the earliest known AIDS cases — a Manchester seaman who had worked in Central Africa and a Bantu man from the Congo — date back to 1959.

From these three facts we can reasonably conclude that HIV passed from chimpanzees to humans in Africa sometime prior to 1959.

Now comes the outrageous suggestion. Extensive oral polio virus trials were caried out in Central Africa (the old Belgian Congo) between 1957 and 1960. Polio was a big killer and crippler then, producing the same level of concern that AIDS does now, and the pressure to find a reliable vaccine was intense. While small trials were carried out in America, the bulk of the vaccine trials took place in Central Africa.

The CHAT polio vaccine tested in Central Africa was developed in the 1950s at the Wistar Institute in Philadelphia. The CHAT vaccine consisted of polio viruses grown in tissue culture, then weakened — the weakened virus could not cause disease, but could evoke a strong immune response, protecting the vaccinated person from any future polio infection.

Most batches of CHAT were grown on tissue taken from monkeys. Importantly, however, a small number of batches were grown on chimpanzee kidneys. What if these chimpanzees had been infected with SIV? If they were, the CHAT vaccine prepared from their kidneys might have been rich with SIV virus. With only a few quick mutations the CHAT polio vaccine would have become a resevoir of HIV. Immunizing thousands with the polio vaccine would unknowingly have started an epidemic of HIV among humans, igniting the pandemic that grips the world today.

You’ve got to admit, that’s a pretty juicy hypothesis.

Most researchers have resisted taking this hypothesis very seriously. Only a small number of chimpanzee kidneys were ever used in preparing the polio vaccine, and SIV is quite rare among chimpanzees. Still, the suggestion would not go away. Even if a stretch, it might be true. It had to be tested.

Now it has been. 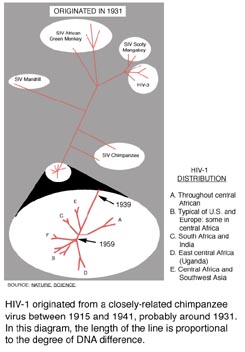 In research reported this summer in the journal SCIENCE, a team of medical researchers led by B. Korber and T. Bhattacharya of the Los Alamos National Laboratory, NM, has used parallel supercomputers to examine complete DNA sequences from the env gene collected from several hundred HIV-1 infected AIDS patients.

The env gene encodes the protein gp160 which makes up the virus coat. The HIV virus undergoes many mutations as it passes from one person to the next — its DNA copying machinery is pretty sloppy — so HIV samples collected later in the epidemic will have accumulated more changes in the env gene than samples collected earlier. By extrapolating back, it is possible to estimate the date when the last common ancestor to HIV-1 came into being — that is, when HIV-1 first originated from SIV.

When this is done, the researchers obtain a date of 1931. Because they employed so much data in their analysis (hence the supercomputers), they are able to put 95% confidence intervals of 1915 to 1941 on their estimate. Furthermore, a sample known to have originated in 1959 gave an accurate estimate for the date of its origin.

It thus seems very clear that the HIV-1 virus responsible for most of the AIDS pandemic originated far earlier than the late 1950s when the polio vaccine was being tested in Central Africa. There is no reasonable way the AIDS epidemic could have been caused by a polio vaccine thirty years before the vaccine was made.

The suggestion that a vaccine caused AIDS was a horrible possibility, but wrong.