There have been 90,000 reports of UFOs, now mapped. What is a scientist to make of UFO sightings by reasonable people?

Some strange ideas die hard; others seem immortal, alive in our minds, immune to logic or the criticism of wise elders. Flying saucers are an idea like that. Nowadays we call Unidentified Flying Objects, or UFOs. When I was a child, a lot of years ago, reports of flying saucers routinely made the news. They still do. Investigations by the government and by private individuals are announced from time to time, but have never led to conclusive proof that UFOs do, or don’t, exist. 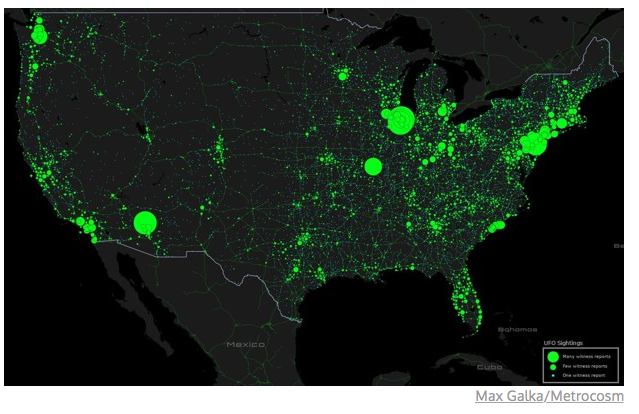 I am reminded of this forcefully with the recent publication of a map locating UFO sightings in the United States since 1905 – over 90,000 of them! Can so many people be flat wrong? Not surprisingly, reports of sightings tend to be located on the map most frequently where the most people are – and occur EVERYWHERE that people are. On the map, the size of a circle indicates how many different people reported seeing a particular UFO. The large circle over Chicago, for example, refers to the night of October 31, 2004, when 77 people scattered about the metro area reported seeing a formation of flying fireballs, travelling as triangles, then in straight lines, then again as triangles. 77 puzzled people – not all of them can be crazy, can they?

As a scientist, I am sure that the only way to resolve the issue of UFO sightings is to examine individual cases in detail. I was not in Chicago in October, 2004. I WAS, however, in the general area of another of the large circles where many people reported seeing a UFO. I am referring to the sighting of a UFO in central Illinois early one January morning fifteen years ago.

This particular UFO flew over Melvin Noll’s miniature golf course about 4 a.m., the morning of January 4, 2000. Flew is perhaps too strong a word. It wasn’t moving fast at all. Floated might be more like it. Melvin says he saw rows of windows. “It was all lighted up and so low that someone could have waved at me out the windows.”

Melvin, after digesting this unusual sight for a few minutes, lit out for the local police station at Highland, Illinois. The dispatcher called the police in Lebanon — it was headed that way — and they saw it too. Later, as it moved west, so did other police. In addition to Melvin Noll, four Metro East police officers filed reports of seeing the object in the sky as it passed Lebanon, Shiloh, Millstadt, and Dupo. At least two civilians also reported seeing the object as they drove to work early that morning.

I can think of three ways to account for Melvin’s UFO:

First, its all some sort of joke or hysteria, and there was in fact nothing real floating over Melvin and his miniature golf course. This doesn’t seem to me a likely explanation. Four independent police reports are no casual bit of nonsense, no encounter of the “after the bar closed” kind. Police are high quality observers, neither delusional nor fanciful. And the police that saw the UFO did not think it a joke. Indeed, two of the officers contacted the National UFO Reporting Center in Seattle the morning after the sighting.

Second, Melvin’s UFO might be some sort of novel military craft, not known to the general public. The police witnesses told reporters the object resembled a drawing of a “stealth blimp” that appeared recently in Popular Mechanics magazine. Was it an experimental military aircraft? There is no radar track to confirm or disprove — the air traffic control tower at Scott Air Force Base was shut down at the time. The government denies all knowledge of any such craft. Still, this is where I would bet my money.

Third, Melvin’s UFO might be a UFO. All those windows and brilliant glaring lights don’t sound like any blimp I ever heard of. How could a blimp generate enough power? But if it wasn’t a blimp, what was it? Sherlock Holmes said that when you have eliminated the impossible, what remains, however improbable, must be true. I suspect Homes would vote for the UFO. 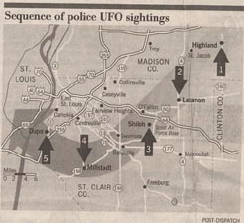 A particularly interesting thing about Melvin’s UFO becomes clear if you plot the five confirmed reports of police sightings on a map. The sightings move south and west on a slow swooping curve aimed right at — St. Louis! The thought of just what in St. Louis is attracting UFOs beggars the imagination.

So, bottom line, are there UFOs? As a scientist I don’t accept UFOs as anything more than highly unlikely – but I see no reason to rule them out of the real world, consigning them to fantasy like Santa Clause and jackalopes. Said simply, there are very real limits to what we know, to what science is able to understand. Seems to me it’s a mistake to simply ignore 90,000 people, many of them sensible, reasonable folks. Better to skeptically reserve judgement.

I live quite comfortably in a world where reasonable people see UFOs. UFO sightings are sort of like background noise, constantly reminding us of the limits of what we know. I would miss them if UFOs were to be proven imaginary after all. I can no more imagine a world without UFOs than one without Santa. If there were one, I suspect it would be a drab grey place, with no “X files,” no “MEN IN BLACK,” no “INDEPENDENCE DAY.” I wouldn’t want to live there.