The Triassic: Origin of Dinosaurs

Dinosaurs are reptiles. The first dinosaurs evolved from thecodonts, a crocodile-like group of now-extinct meat-eating reptiles (figure 45.47). The oldest dinosaurs of which we have any clear evidence left their fossils in late Triassic rock in Argentina, some 235 million years old (figure 45.48). Only 1 foot long, one of the first dinosaurs was a bipedal (that is, it stood up and ran on its hind feet) carnivore named Eoraptor. Almost as old is Herrerasaurus, a bulky 13 foot carnivore with sharp pointed teeth and a sliding jaw joint that let it slice its victims as it bite into them. These early dinosaurs, all meat-eaters, were the first vertebrates to exhibit the key dinosaurian improvement in body design-their legs are positioned directly under the body, allowing them to run swiftly after prey. By the end of the Triassic, small carnivorous dinosaurs were very common, most of them slightly-built and bipedal, like the long-neckedCoelophysis. 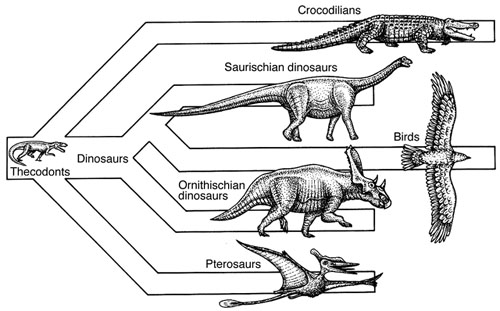 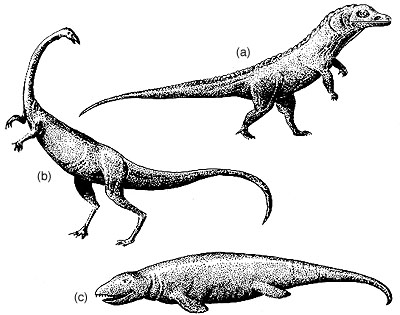 Figure 45.48
Early dinosaurs. (a) Euparkeria was less than a meter long, but was an active carnivore. (b) Coelophysis was a long-necked, bipedal, carnivorous dinosaur of the late Triassic. (c) Returning to the sea, marine reptiles, such as this placodont, had large bodies, short necks, and paddlelike limbs. They were likely the dominant marine predators.

During the late Triassic, all the continents were together in a single super-continent called Pangaea (figure 45.49). There were few mountain ranges over this enormous stretch of land, the interior of which was arid and dry, with widespread deserts. Coastal climates were much the same all over the world-quite warm, with a dry arid season followed by a very wet monsoon season. By the end of the Triassic, 213 million years ago, dinosaurs had become common, replacing the thecodonts and surviving amphibians.

Figure 45.49
Migration of the major land masses. The continents were not in their present positions when dinosaurs lived. In the Triassic (a), all of the continents were connected into a huge supercontinent, Pangaea. This landmass began to break up during the Jurassic (b). By the Cretaceous (c), today’s continents began to be recognizable, although Australia and Antarctica did not separate until 50 million years ago, 15 million years after the dinosaurs became extinct.

There are at least three reasons why dinosaurs were so successful:

The Jurassic: Golden Age of the Dinosaurs

During the early Jurassic, the period that followed the Triassic, vast deserts still covered much of Pangaea, especially in what was later to become western North America, which was covered by a vast sand sea during much of this time. Few ferns survived into these drier climates-the dominant trees were cycads, plants that resemble palm trees and are well-adapted to arid climates.

Change, however, was in the air: The great super-continent of Pangaea was breaking up. Long fingers of ocean began to separate the northern part, called Laurasia (the future continents of North America, Europe, and Asia) from the southern part, called Gondwana (the future continents of South America, Africa, Australia, and Antarctica), and the two land masses became fully separated by the end of the Jurassic. World sea levels began to rise, and much of Laurasia and Gondwana began to be inundated by sea water, forming shallow inland seas. The world climate became even warmer, and because so much of the land was nearer to the oceans conditions became progressively less arid.

The Jurassic is called the “Golden Age” of dinosaurs, because of the variety and abundance of dinosaurs that lived during this time, among them the largest land animals of all time, the giant sauropods (figure 45.50). Sauropods such as Brachiosaurus were the dominant herbivores (plant eaters) of the Jurassic. Some weighed 55 tons, stood 35 feet tall, and were over 100 feet long, longer than a football field! They had enormous barrel-shaped bodies with heavy column-like legs, and very long necks and tails.

Figure 45.50
A sauropod. Sauropods, such as this Mamenchiasaurus, were the largest land animals ever to have lived.

The next-largest Jurassic herbivores, the size of a big pickup truck, were the stegosaurs. Stegosaurus weigh about a ton and was 15 feet long. Stegosaurs were bottom browsers that ate low to the ground. They had a row of narrow plates along their backs, and on the tip of their tail sharp spikes over a foot long.

By the late Jurassic, very sophisticated carnivorous dinosaurs (flesh-eating dinosaurs are called theropods) had evolved (descendants of Herrerasaurus) that preyed on the large herbivorous dinosaurs. Bipedal, with powerful legs, short arms, and a big head, Allosaurus had the body design typical of theropods, well-suited for rapid running and a quick, slashing attack.

The Cretaceous: Triumph of the Chewers

The Jurassic ended 144 million years ago, followed by the Cretaceous, a period of profound change in the history of dinosaurs. Both Laurasia and Gondwana fragmented during the Cretaceous into the continents we now know. Sea levels continued to rise, so that by the mid-Cretaceous sea levels had reached an all-time high and the interior of North America was a vast inland sea. Much of the world’s climate was tropical, hot and wet, like a greenhouse. Most importantly, the early Cretaceous saw the first appearance of flowering plants, angiosperms. The appearance of this new kind of plant had a profound effect on herbivorous dinosaurs. Stegosaurs and most sauropods become extinct, replaced by a totally different kind of plant eater better adapted to consuming these tough versatile plants.

Sauropods and stegosaurs do not chew the plants they eat. They simply shred the leaves and stems and swallow the shreds whole-rocks within their stomachs then batter the swallowed plant material to a pulp. A good strategy with cycads, which have soft, pulpy interiors, this approach doesn’t work well with angiosperms, which are much woodier and tougher. With the rise of angiosperm plants at the beginning of the Cretaceous, sauropods and stegosaurs were replaced by iguanodonts, which had “chewing” teeth (figure 45.51). The jaws of iguanodonts contain enormous batteries of grinding teeth that shred, pound, and grind even the toughest angiosperms. Even bigger than stegosaurs, Iguanodon was as heavy as an elephant. 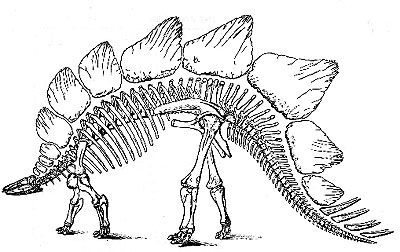 Figure 45.51
Stegosaurus. Stegosaurs were common herbivores in the Jurassic, while iguanodonts, ceratopians, and armored dinosaurs were more common in the Cretaceous.

Later in the Cretaceous, iguanodonts are replaced in turn by a diverse array of equally large chewing herbivores: hadrosaurs (the so-called “duck billed” dinosaurs) with bony crests on their heads, ceratopians like Triceratops with bony head frills and horns, and armor-plated dinosaurs called ankylosaurs, the most numerous and diverse of all kinds of dinosaurs. As long as 30 feet long and weighing up to 5 tons, many of these chewing dinosaurs were larger than a Sherman battle tank.

Extinction of the Dinosaurs

Towards the end of the Cretaceous, sea levels began to fall and the climate to cool. Many kinds of dinosaurs become less common-and then, suddenly, 65 million years ago, all dinosaurs disappear from the fossil record (figure 45.52). What cause the sudden extinction of the dinosaurs, after 150 million years of success? Most biologists now agree that the most likely cause was the impact of a gigantic meteor (it appears to have been 5-10 miles across!) off the coast of Yucatan. The thin line of sediment that marks the end of the Cretaceous in rocks today is rich in iridium (a mineral rare in the earth’s crust but common in meteors), in tiny spheres of cooled molten rock, and in bits of quartz shocked by high-velocity impact (figure 45.53). The impact created a huge crater 185 miles in diameter, throwing massive amounts of material into the atmosphere that would have blocked out all sunlight for a considerable period of time, creating a world-wide period of low temperature. Insulated with feathers or fur, the endothermic birds and mammals (those whose body temperature is determined by the heat generated by the animal’s metabolism) survived, and the ectothermic reptiles and amphibians (those whose body temperature is determined by the temperature of the environment) did too-ectothermic animals simply lower their activity levels. 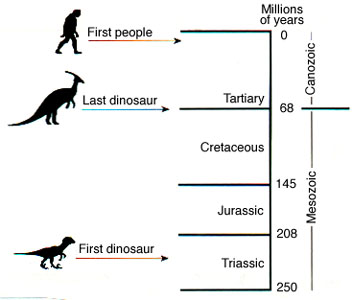 Figure 45.52
Extinction of the dinosaurs. The dinosaurs became extinct sixty-five million years ago in a major extinction event that also eliminated all the great marine reptiles as well as the largest of the primitive land mammals. Crocodiles, small lizards, and turtles survived, but reptiles never again achieved the diversity of the Cretaceous period. 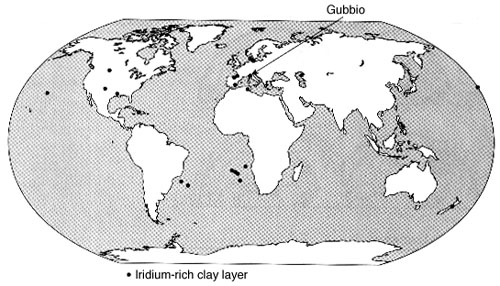 Figure 45.53
Traces of iridium have been found in Cretaceous sediments worldwide. A very large impact crater lies off the coast of the Yucatan peninsula in Mexico. The age of this crater coincides with the extinction of the dinosaurs at the end of the Cretaceous Period. Scientists have calculated that an impact large enough to create this crater would have thrown enough dust (which can be identified by its high iridium content) into the atmosphere to drastically reduce the amount of sunlight reaching the Earth’s surface.

We can never be sure why the dinosaurs did not live through the deep cold. Disease might have killed them, or sudden intense competition from mammals have led to their extinction. However, the most reasonable and widely-accepted explanation is that the cold itself killed them. Most if not all Cretaceous dinosaurs appear to have been endothermic (figure 45.54), biologists now believe (we will discuss the evidence for this in the next section). Being endothermic created a critical dilemma in the period of intense cold after the meteor impact, for the dinosaur body had no insulation, no way to retain body heat. Endothermy made a great contribution to the success of the dinosaurs, but created an evolutionary dead end from which they could not emerge. 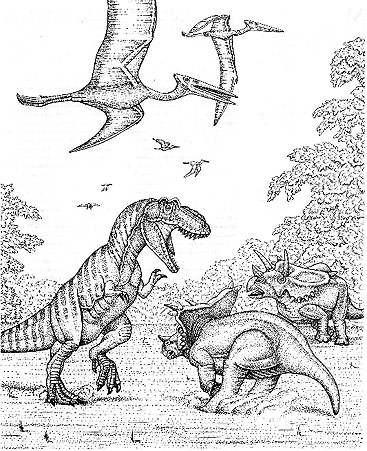