Many different kinds of dinosaurs evolved over the long 150 million year reign of the dinosaurs (figure 45.59). While each kind of dinosaur has its own peculiarities, many can be thought of as variants of one of six basic body designs: sauropods, theropods, stegosaurs, ornithopods, armored dinosaurs, and horned dinosaurs (figure 45.60). Each body design is driven by the requirements of a particular life-style, determined in large measure by what the dinosaur ate, how it digested its meal, and how it avoided being eaten. 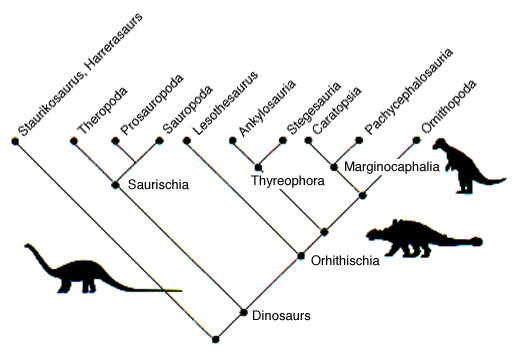 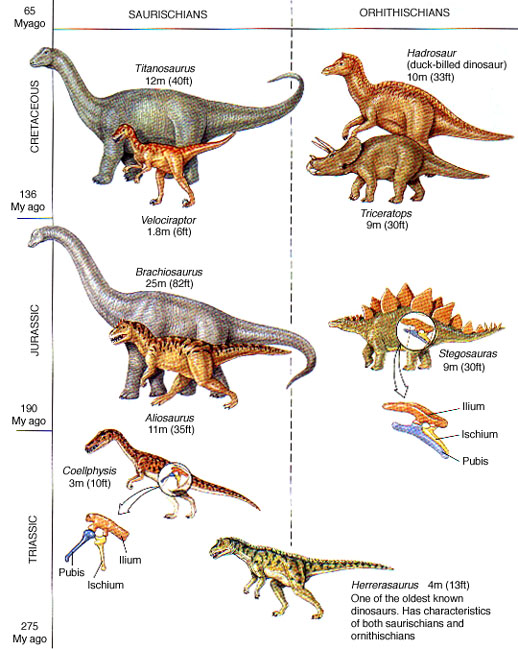 Figure 45.60
Dinosaurs are categorized into two main groups based on hip design.

Sauropods, the dominant dinosaurs of the Jurassic, were giant herbivores, the largest land animals to have ever lived. All had massive barrel-shaped bodies supported by four pillar-like legs, and very long necks and tails. There were two basic kinds.

Typified by this Brachiosaurus, these largest of sauropods had serrated, chopping teeth and front legs longer than the rear ones, to raise the body up to crop the tops of trees. A Brachiosaurus was 75 feet long and 40 feet tall (the shoulders were 20 feet off the ground!), weighing an incredible 89 tons (more than 12 African bull elephants or three thousand students). The neck was 32 feet long! 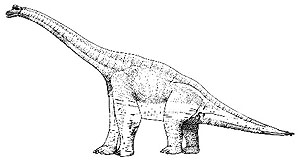 Typified by this Diplodocus, these sauropods had smaller bodies than the top-eaters (Diplodocus weighed 11 tons), and even longer necks and tails (the tail of Diplodocus is 46 feet long!). From tip of nose to tip of tail, Diplodocus was 86 feet long, the length of a subway train. Other bottom browsers were even longer. Opposite of top eaters, the hind legs of bottom browsers were longer than the front legs. They had slender, peg-like teeth, good for browsing at the surface. Apatosaurus was a somewhat larger member of this group, weighing 33 tons. 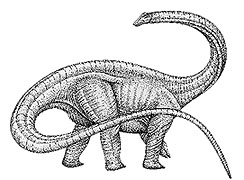 Theropods were bipedal meat-eaters with short grasping forearms and sharp slicing teeth. All theropods were lizard-hipped, and shared the same basic body design. There were three basic kinds, differing mostly in size.

Large theropods—typified by Allosaurus in the Jurassic and this Tyrannosaurus rex (the largest of all meat-eating dinosaurs) in the Cretaceous. Allosaurus,the chief carnivore of the Jurassic, weighed about 2 tons and stood some 15 feet tall, while Tyrannosaurus (which evolved late in the Cretaceous and was never common) weighed fully 8 tons and stood 20 feet tall, with sharp ripping teeth each 6 inches long.

Medium-sized theropods with a lethal 5″ sickle-shaped claw on each foot for ripping prey. About the size of a human, they had the light speedy body of a coelurosaur with the massive strong head of a carnosaur—typified by Velociraptor and this Deinonychus. Cretaceous dinosaurs, raptors had among the largest brains for body weight of any dinosaur. The arms were long for a theropod, with three grasping fingers with long sharp claws.

Common in the late Jurassic, they are thought to be the direct ancestors of birds. 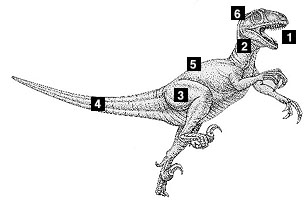 Iguanodonts, typified by this Iguanodon, were very large herbivores, 30 ft long, 16 feet tall, and weighing 5 tons—as big as a small house! Iguanodon had massive legs, and walked on all four legs most of the time. They evolved in the mid-Jurassic, replacing sauropods, and were common until replaced in turn by another kind of ornithopod, the hadrosaur.

Hadrosaurs, a very successful dinosaur typified by this Hadrosaurus, are often called duck-billed dinosaurs because they had a broad, flattened snout with a toothless beak used to crop plants. Thirty feet long, but less massive than iguanodonts, hadrosaurs had long hind legs—they walked on four legs, but were able to rise up and run on their hind legs like an ostrich in times of danger.

Many had bony crests on the tops of their heads, which may have been used as trumpets. In the Cretaceous, hadrosaurs were the most abundant dinosaurs in North America. 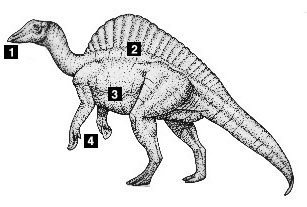 Plant-eating dinosaurs of the Cretaceous, these bird-hipped dinosaurs were designed like battle tanks. Individuals weighed up to 3 tons, their bodies encased in heavy armor. The armor consisted of bands of horn-covered plates embedded in the skin from neck to tip of tail, with sharp spikes sticking out from each side of the body. Armored dinosaurs were among the most diverse of all dinosaurs. There were two basic kinds:

From 6 to over 25 feet long, these dinosaurs had hundreds of “nodes” of bone studding their bony plates like thorns (hence their name). Their small heads were long and slender. Nodosaurs were large, such as this Nodosaurus, 18 ft long. Sauropelta was 25 feet long and estimated to have weighed over three tons. Weighing this much, they could not have moved fast—their shoulders and hips were powerfully developed to lumber along under their great weight. Most nodosaurs cropped plants with a turtle-like beak in front, and had weak teeth on the side of the jaw.

Replacing nodosaurs in the late Cretaceous, these armored herbivores had a unique defensive weapon at the tip of their tails—a large ball of fused bone that was swung from side to side as a club. Like a bowling ball on a chain (only even heavier), it could smash a theropod lethally. Bigger than nodosaurs, ankylosaurs were shorter and stockier—typified by this Ankylosaurus, which was fully 33 feet long and weighed 4 tons, its broad squat body supported by strong stumpy legs set directly beneath the body. Ankylosaurs had hips fused to the backbone, forming a super-strong anchor for the hind legs.

Stegosaurs were large plant-eating dinosaurs of the Jurassic. They had small heads and a row of great bony plates that extended down the backbone, projecting alternately to one side, then the other (many pictures erroneously portray them as having two rows of plates!). The bony plates may have been useful in defense, but appear to have functioned primarily as a heating and cooling system—blood flowed through the thin epithelium covering the plates and was either cooled by breezes or warmed by the sun. Defense was provided by three-foot-long sharp spikes on the tail, used to whack any threatening predators. Unlike sauropods and theropods, stegosaurs were bird-hipped.

All 24 kinds of stegosaurs are basically similar, typified by Stegosaurus, the largest: Stegosaurus had four spikes on the tip of its tail, while other stegosaurs had 8 or more. On average, Stegosaurus was 20 ft long and weighed 2 tons. Much too heavy to stand upright, stegosaurs walked on four legs. The massive hind legs were twice the length of the forelegs, which meant that the body sloped steeply forward from the hips. The skull was only 16 inches long, containing a brain the size of a walnut. It had a toothless beak in front for cropping cycads, and tiny non-abrading teeth on the sides—like sauropods, it crushed plant material with stones in its stomach.

A typical Triceratops individual was over 30 feet long and weighed as much as 11 tons. Its neck frill is a solid sheet of bone, bearing needle-sharp horns over 3 feet long. With stocky but powerful legs, it could run quite fast—imagine those horns bearing down on you like a freight train!

45.5 The dinosaurs were the dominant terrestrial vertebrates until they abruptly disappeared 65 million years ago.

45.6 Dinosaurs had a variety of unique skeletal and physiological characteristics.

45.7 Dinosaurs can be categorized into six basic body designs.

DinoBuzz
Detailed information and discussion of many current topics concerning dinosaurs, such as dinosaur-bird relationships, warm blooded dinosaurs, dinosaur extinction, and many other topics.

Teaching About Dinosaurs
A broad array of lesson plans and activities about dinosaurs, both online and offline, with many interesting links.

Czerkas, S. J. and E. C. Olson, eds: Dinosaurs Past and Present Volume I, The University of Washington Press, Seattle, 1987.

Fastovsky, D. E. and D. B. Weishampel: The Evolution and Extinction of the Dinosaurs, Cambridge University Press, New York, 1996.

Russell, D. A.: An Odyssey in Time: The Dinosaurs of North America, University of Toronto Press and National Museum of Natural Sciences, Canada, 1989.