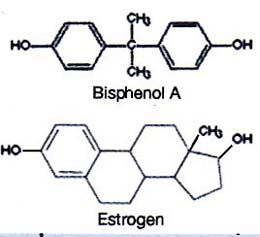 This month the Food and Drug Administration released a long-awaited draft report on the safety of a controversial chemical used to line the metal interior of canned foods and to make plastic bottles shatterproof.  Called bisphenol A or simply BPA, the chemical has been banned from use in baby bottles in Canada, and legislation to restrict its use has been introduced in California, New Jersey and ten other states.  Such legislation could have a major impact on the chemical industry, as more than 6 million pounds of BPA are produced in the United States each year by Dow Chemical, BASF, Bayer AG and other manufacturers. It will come as no surprise that the chemical industry sees no danger in BPA and no need for laws to restrict its use.

It comes as much more of a surprise to me that the draft FDA report finds that BPA is not dangerous.  Their report, based in large part on data provided by the chemical industry, concludes that the trace levels of BPA found in almost all Americans are thousands of times below what would actually be dangerous to adults or children.

I wrote a newspaper column four months ago, before the birth of the Beacon, laying out the case against BPA.  What I said was that the danger of BPA was not as a toxic chemical, something like mercury that poisons your body.  Its danger, rather, was as a hormone, something that in tiny amounts could cause your body’s genes to act inappropriately.  That the FDA found that BPA is not toxic does not begin to address this issue.

Why am I so upset with this bow to the chemical industry by the FDA?  The possibility that haunted me when I wrote that column, as it does now, is that BPA is the long-sought cause of breast cancer.

Anyone that wants to know what causes breast cancer must first seek to answer this basic question: Why don’t men get breast cancer?  An estimated 211,240 new cases of invasive breast cancer are expected to occur among women in the United States during 2007, and 1,690 new cases among menover 99% of the new breast cancer victims will be women. Similarly, of 40,870 breast cancer deaths anticipated that year, all but 460 of them will be women. It is impossible not to wonder, why so few men? An obvious answer would be that men don’t have breasts, but men do have breast tissue, it just isn’t as developed as a woman’s.

So we are back to the same question: why so few men?  It is in answering this question that we stumble across BPA. While 5% of breast cancers are due to inherited genetic mutations (BRCA1 and BRCA2), the cause of 95%  the overwhelming majority  remains a mystery. Hormone differences between men and women seem the most promising place to start, as the female sex hormone estrogen controls breast development in women; men, by contrast, lack physiologically significant amounts of estrogen. A logical suggestion is that in breast cancer patients the effect of estrogen on breast cells is being altered by exposure to a so-called “endocrine disruptor” chemical.  Endocrine disruptors are man-made chemicals that mimic hormones.  By sheer chance, their molecules are perfectly shaped to fit particular hormone receptors.  In this case, the culprit would be a chemical mimic of estrogen that promotes cancerous growth in breast cells.

Front and center, the obvious candidate is bisphenol A (BPA), because the molecule looks a lot like estrogen (with carbon rings at each end tipped with OH groups) and because BPA is a chemical to which all of us are exposed daily. BPA is a linker in the manufacture of clear hard plastic.  It is used to form the plastic packaging of many foods and drinks, as well as the clear plastic liners of metal food and beverage cans. Every one of us is exposed to it repeatedly every day.  Fully 93% of Americans have traces of bisphenol in their urine, according to the Center for Disease Control. 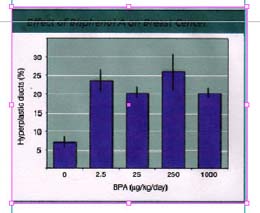 So what’s the problem with that, the chemical industry asks.  BPA is not toxic at the trace levels found in people. The problem is that it has been known since 1938 that BPA promotes excess estrogen production in rats. Estrogen, a hormone, is effective in very tiny amounts. Alarmingly, in 1993 BPA was shown to have the same effects on human breast cancer cells growing in culture. What was alarming was that the effect could be measured at concentrations as low as 2 parts per billion, not much above the levels to which we humans are routinely exposed.

This suggests that BPA might in fact be inducing breast cancer!  To test this possibility, Dr. Ana Soto of Tufts University School of Medicine and her research team in 2006 tested its effects on rats, which get breast cancer in much the same way as humans do.  They exposed pregnant female rats to a range of BPA concentrations, and after 50 days sacrificed them for examination of their breast tissue.  The researchers looked in particular for aberrant cell growth patterns in breast tissue called ductal hyperplasias, which in both rats and people are considered to be the precursors of breast cancer.  BPA was administered to four groups of rats.  Some received low doses not unlike what humans are exposed to, while others received much higher doses.  In a fifth group, which served as a control, no BPA was administered.

The graph shows what the researchers found.  Amounts of BPA administered to the rats are reported in micrograms of BPA per kilogram of body weight per day.  The incidence of breast cancer detected is presented as the percent of examined breast tissue ducts which were hyperplastic (that is, precancerous).  Vertical black lines (called error bars) represent 5% confidence intervals (a measure of scatter among the data95% of replicate experiments would be expected to fall within the ranges of the error bars).

What are we to make of the data the researchers obtained? Did any of the four doses of BPA they administered result in a percent of hyperplastic  ducts significantly higher than that seen in the BPA control group? (hint: if their error bars overlap with the control’s, the difference is not significant). The answeryes, all four doses are significant.  Do higher doses of BPA increase the incidence of hyperplastic ducts? (hint: do the error bars of the four doses fail to overlap?). No, all doses yielded similar results.  It is difficult to avoid the conclusion that exposure to even low levels of bisphenol A induces ductal hyperplasias in laboratory rats.

These results suggest the rather alarming conclusion that BPA, a chemical to which we are all exposed every day, may cause breast cancer.  Now we can answer the question that started us on our search: Women get breast cancer and men don’t for the simple reason that men lack estrogen receptors to be fooled by BPA.

While the study is small and a rat is not a human, a much larger study in humans reported this spring by the National Toxicology Center of the National Institutes of Health says low levels of exposure to BPA can also cause changes to mammary gland tissue in human infants, indicating potential long term risks of breast cancer in humans as well.

Most government-funded breast cancer research has focused on the search for more effective breast cancer treatments.  Far less money is spent on searching for the causes of breast cancer.  The most encouraging aspect of the studies described here is their suggestion that such a search, if it became a priority, might prove fruitful.  The FDA’s new draft report isn’t going to help.