The Prospects for HIV Treatment

New discoveries of how HIV works continue to fuel research on devising ways to counter HIV. For example, scientists are testing drugs and vaccines that act on HIV receptors, researching the possibility of blocking CCR5, and looking for defects in the structures of HIV receptors in individuals that are infected with HIV but have not developed AIDS. Figure 5 summarizes some of the recent developments and discoveries. 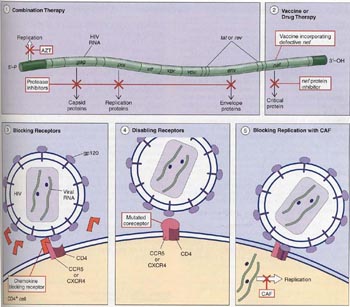 Figure 5
Research is currently underway to develop new treatments for HIV. Among them are these five: (1) Combination therapy involves using two drugs, AZT to block replication of the virus and protease inhibitors to block the production of critical viral proteins. (2) Using a defective form of the viral gene nef, scientists may be able to construct an HIV vaccine. Also, drug therapy that inhibits nefs protein product is being tested. (3) Other research focuses on the use of chemokine chemicals to block receptors (CXCR4 and CCR5), thereby disabling the mechanism HIV uses to enter CD4+ T cells. (4) Producing mutations that will disable receptors may also be possible. (5) Lastly, CAF, an antiviral factor which acts inside the CD4+ T cell, may be able to block replication of HIV.

A variety of drugs inhibit HIV in the test tube. These include AZT and similar nucleoside analogs (which inhibit virus nucleic acid replication) and protease inhibitors (which inhibit the cleavage of the large polyproteins encoded by gag, pol, and env genes into functional capsid, enzyme, and envelope segments). When combinations of these drugs were administered to people with HIV in controlled studies, their condition improved. A combination of a protease inhibitor and two AZT type drugs entirely eliminated the HIV virus from many of the patients bloodstreams. Importantly, all of these patients began to receive the drug therapy within three months of contracting the virus, before their bodies had an opportunity to develop tolerance to any one of them. Widespread use of this combination therapy has cut the U.S. AIDS death rate by three-fourths since its introduction in the mid-1990s, from 49,000 AIDS deaths in 1995 to 36,000 in 1996, and just over 10,000 in 1999.

Recently, five people in Australia who are HIV-positive but have not developed AIDS in 14 years were found to have all received a blood transfusion from the same HIV-positive person, who also has not developed AIDS. This led scientists to believe that the strain of virus transmitted to these people has some sort of genetic defect that prevents it from effectively disabling the human immune system. In subsequent research, a defect was found in one of the nine genes present in this strain of HIV. This gene is called nef, named for negative factor, and the defective version of nef in the HIV strain that infected the six Australians seems to be missing some pieces. Viruses with the defective gene may have reduced reproductive capability, allowing the immune system to keep the virus in check.

This finding has exciting implications for developing a vaccine against AIDS. Before this, scientists have been unsuccessful in trying to produce a harmless strain of AIDS that can elicit an effective immune response. The Australian strain with the defective nef gene has the potential to be used in a vaccine that would arm the immune system against this and other strains of HIV.

Another potential application of this discovery is its use in developing drugs that inhibit HIV proteins that speed virus replication. It seems that the protein produced from the nef gene is one of these critical HIV proteins, because viruses with defective forms of nef do not reproduce, as seen in the cases of the six Australians. Research is currently underway to develop a drug that targets the nef protein.

In the laboratory, chemicals called chemokines appear to inhibit HIV infection by binding to and blocking the CCR5 and CXCR4 coreceptors. As you might expect, people long infected with the HIV virus who have not developed AIDS prove to have high levels of chemokines in their blood.

The search for HIV-inhibiting chemokines is intense. Not all results are promising. Researchers report that in their tests, the levels of chemokines were not different between patients in which the disease was not progressing and those in which it was rapidly progressing. More promising, levels of another factor called CAF (CD8+ cell antiviral factor) are different between these two groups. Researchers have not yet succeeded in isolating CAF, which seems not to block receptors that HIV uses to gain entry to cells, but, instead, to prevent replication of the virus once it has infected the cells. Research continues on the use of chemokines in treatments for HIV infection, either increasing the amount of chemokines or disabling the CCR5 receptor. However, promising research on CAF suggests that it may be an even better target for treatment and prevention of AIDS.

A 32 base-pair deletion in the gene that codes for the CCR5 receptor appears to block HIV infection. Individuals at high risk of HIV infection who are homozygous for this mutation do not seem to develop AIDS. In one study of 1955 people, scientists found no individuals who were infected and homozygous for the mutated allele. The allele seems to be more common in Caucasian populations (10% to 11%) than in African-American populations (2%), and absent in African and Asian populations. Treatment for AIDS involving disruption of CCR5 looks promising, as research indicates that people live perfectly well without CCR5. Attempts to block or disable CCR5 are being sought in numerous laboratories.

A cure for AIDS is not yet in hand, but many new approaches look promising.