How can we prevent cancer? The most obvious strategy is to minimize mutational insult. Anything that decreases exposure to mutagens can decrease the incidence of cancer because exposure has the potential to mutate a normal gene into an oncogene. It is no accident that the most reliable tests for the carcinogenicity of a substance are tests that measure the substances mutagenicity.

The Association between Smoking and Cancer

About a third of all cases of cancer in the United States are directly attributable to cigarette smoking. The association between smoking and cancer is particularly striking for lung cancer (figure 9). Studies of male smokers show a highly positive correlation between the number of cigarettes smoked per day and the incidence of lung cancer (figure 10). For individuals who smoke two or more packs a day, the risk of contracting lung cancer is at least 40 times greater than it is for nonsmokers, whose risk level approaches zero. Clearly, an effective way to avoid lung cancer is not to smoke. Other studies have shown a clear relationship between cigarette smoking and reduced life expectancy (figure 11). Life insurance companies have calculated that smoking a single cigarette lowers ones life expectancy by 10.7 minutes (longer than it takes to smoke the cigarette)! Every pack of 20 cigarettes bears an unwritten label:

The price of smoking this pack of cigarettes is 3 1/2 hours of your life. 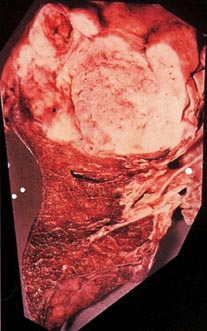 Figure 9
Photo of a cancerous human lung. The bottom half of the lung is normal, while a cancerous tumor has completely taken over the top half. The cancer cells will eventually break through into the lymph and blood vessels and spread through the body. 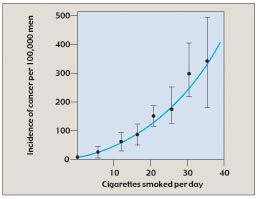 Figure 10
Smoking causes cancer. The annual incidence of lung cancer per 100,000 men clearly increases with the number of cigarettes smoked per day. 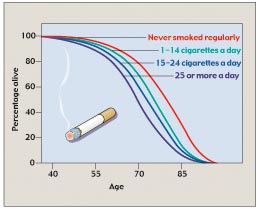 Figure 11
Tobacco reduces life expectancy. The worlds longest-running survey of smoking, begun in 1951 in Britain, revealed that by 1994 the death rate for smokers had climbed to three times the rate for nonsmokers among men 35 to 69 years of age.
Source: Data from New Scientist, October 15, 1994.

Smoking Introduces Mutagens to the Lungs

Over half a million people died of cancer in the United States in 2002; about 28% of them died of lung cancer. About 140,000 persons were diagnosed with lung cancer each year in the 1980s. Around 90% of them died within three years after diagnosis; 96% of them were cigarette smokers.

Smoking is a popular pastime. In the United States, 23.5% of adults and 31% of teens smoke, and U.S. smokers consumed 520 billion cigarettes in 1989. The smoke emitted from these cigarettes contains some 3000 chemical components, including vinyl chloride, benzo[a]pyrenes, and nitroso-nor-nicotine, all potent mutagens. Smoking places these mutagens into direct contact with the tissues of the lungs.

Mutagens in the Lung Cause Cancer

Introducing powerful mutagens to the lungs causes considerable damage to the genes of the epithelial cells that line the lungs and are directly exposed to the chemicals. Among the genes that are mutated as a result are some whose normal function is to regulate cell proliferation. When these genes are damaged, lung cancer results.

This process has been clearly demonstrated for benzo[a]pyrene (BP), one of the potent mutagens released into cigarette smoke from tars in the tobacco. The epithelial cells of the lung absorb BP from tobacco smoke and chemically alter it to a derivative form. This derivative form, benzo[a]pyrene-diolepoxide (BPDE), binds directly to the tumor-suppressor gene p53 and mutates it to an inactive form. The protein encoded by p53 oversees the G1 cell cycle checkpoint and is one of the bodys key mechanisms for preventing uncontrolled cell proliferation. The destruction of p53 in lung epithelial cells greatly hastens the onset of lung cancerp53 is mutated to an inactive form in over 70% of lung cancers. When examined, the p53 mutations in cancer cells almost all occur at one of three hot spots. The key evidence linking smoking and cancer is that when the mutations of p53 caused by BPDE from cigarettes are examined, they occur at the same three specific hot spots!

The Incidence of Cancer Reflects Smoking

Now look at the lower graph, which presents data on American women. Because of social mores, significant numbers of American women did not smoke until after World War II, when many social conventions changed. As late as 1963, when lung cancer among males was near current levels, this disease was still rare in women. In the United States that year, only 6588 women died of lung cancer. But as more women smoked, more developed lung cancer, again with a lag of about 20 years. American women today have achieved equality with men in the numbers of cigarettes they smoke, and their lung cancer death rates are today approaching those for men. In 2002, more than 65,000 women died of lung cancer in the United States. The current annual rate of deaths from lung cancer in male and female smokers is 180 per 100,000, or about 2 out of every 1000 smokers each year. 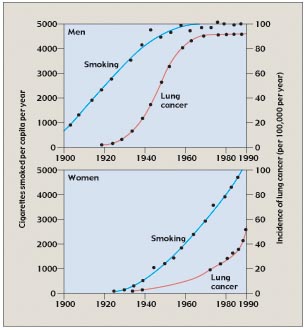 Figure 12
The incidence of lung cancer in men and women. What do these graphs indicate about the connection between smoking and lung cancer?

The easiest way to avoid cancer is to avoid exposure to mutagens. The single greatest contribution one can make to a longer life is not to smoke.