Potential cancer therapies are being developed on many fronts (figure 13). Some act to prevent the start of cancer within cells. Others act outside cancer cells, preventing tumors from growing and spreading. 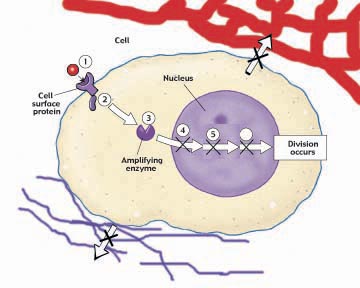 Figure 13
New molecular therapies for cancer target eight different stages in the cancer process. (1) On the cell surface, a growth factor signals the cell to divide. (2) Just inside the cell, a protein relay switch passes on the divide signal. (3) In the cytoplasm, enzymes amplify the signal. In the nucleus, (4) a brake preventing DNA replication is released, (5) proteins check that the replicated DNA is not damaged, and (6) other proteins rebuild chromosome tips so DNA can replicate. (7) The new tumor promotes angiogenesis, the formation of growth-promoting blood vessels. (8) Some cancer cells break away from the extracellular matrix and invade other parts of the body.

Preventing the Start of Cancer

Many promising cancer therapies act within potential cancer cells, focusing on different stages of the cells Shall I divide? decision-making process.

1. Receiving the Signal to Divide.  The first step in the decision process is the reception of a divide signal, usually a small protein called a growth factor released from a neighboring cell. The growth factor is received by a protein receptor on the cell surface. Mutations that increase the number of receptors on the cell surface amplify the division signal and so lead to cancer. Over 20% of breast cancer tumors prove to overproduce a protein called HER2 associated with the receptor for epidermal growth factor.

2. The Relay Switch.  The second step in the decision process is the passage of the signal into the cells interior, the cytoplasm. This is carried out in normal cells by a protein called Ras that acts as a relay switch. When growth factor binds to a receptor like EGF, the adjacent Ras protein acts like it has been goosed, contorting into a new shape. This new shape is chemically active, and initiates a chain of reactions that passes the divide signal inward toward the nucleus. Mutated forms of the Ras protein behave like a relay switch stuck in the ON position, continually instructing the cell to divide when it should not. 30% of all cancers have a mutant form of Ras.

Therapies directed at this stage of the decision process take advantage of the fact that normal Ras proteins are inactive when made. Only after it has been modified by the special enzyme farnesyl transferase does Ras protein become able to function as a relay switch. In tests on animals, farnesyl transferase inhibitors induce the regression of tumors and prevent the formation of new ones.

3. Amplifying the Signal.  The third step in the decision process is the amplification of the signal within the cytoplasm. Just as a TV signal needs to be amplified in order to be received at a distance, so a divide signal must be amplified if it is to reach the nucleus at the interior of the cell, a very long journey at a molecular scale. Cells use an ingenious trick to amplify the signal. Ras, when ON, activates an enzyme, a protein kinase. This protein kinase activates other protein kinases that in their turn activate still others. The trick is that once a protein kinase enzyme is activated, it goes to work like a demon, activating hoards of others every second! And each and every one it activates behaves the same way too, activating still more, in a cascade of ever-widening effect. At each stage of the relay, the signal is amplified a thousand-fold. Mutations stimulating any of the protein kinases can dangerously increase the already amplified signal and lead to cancer. 5% of all cancers, for example, have a mutant hyperactive form of the protein kinase Src.

Therapies directed at this stage of the decision process employ so-called anti-sense RNA directed specifically against Src or other cancer-inducing kinase mutations. The idea is that the src gene uses a complementary copy of itself to manufacture the Src protein (the sense RNA or messenger RNA), and a mirror image complementary copy of the sense RNA (anti-sense RNA) will stick to it, gumming it up so it cant be used to make Src protein. The approach appears promising. In tissue culture, anti-sense RNAs inhibit the growth of cancer cells, and some also appear to block the growth of human tumors implanted in laboratory animals. Human clinical trials are underway.

4. Releasing the Brake.  The fourth step in the decision process is the removal of the brake the cell uses to restrain cell division. In healthy cells this brake, a tumor suppressor protein called Rb, blocks the activity of a transcription factor protein called E2F. When free, E2F enables the cell to copy its DNA. Normal cell division is triggered to begin when Rb is inhibited, unleashing E2F. Mutations which destroy Rb release E2F from its control completely, leading to ceaseless cell division. 40% of all cancers have a defective form of Rb.

Therapies directed at this stage of the decision process are only now being attempted. They focus on drugs able to inhibit E2F, which should halt the growth of tumors arising from inactive Rb. Experiments in mice in which the E2F genes have been destroyed provide a model system to study such drugs, which are being actively investigated.

5. Checking That Everything Is Ready.  The final step in the decision process is the mechanism used by the cell to ensure that its DNA is undamaged and ready to divide. This job is carried out in healthy cells by the tumor-suppressor protein p53, which inspects the integrity of the DNA. When it detects damaged or foreign DNA, p53 stops cell division and activates the cells DNA repair systems. If the damage doesnt get repaired in a reasonable time, p53 pulls the plug, triggering events that kill the cell. In this way, mutations such as those that cause cancer are either repaired or the cells containing them eliminated. If p53 is itself destroyed by mutation, future damage accumulates unrepaired. Among this damage are mutations that lead to cancer. 50% of all cancers have a disabled p53. Fully 70 to 80% of lung cancers have a mutant inactive p53the chemical benzo[a]pyrene in cigarette smoke is a potent mutagen of p53.

A promising new therapy using adenovirus (responsible for mild colds) is being targeted at cancers with a mutant p53. To grow in a host cell, adenovirus must use the product of its gene E1B to block the host cells p53, thereby enabling replication of the adenovirus DNA. This means that while mutant adenovirus without E1B cannot grow in healthy cells, the mutants should be able to grow in, and destroy, cancer cells with defective p53. When human colon and lung cancer cells are introduced into mice lacking an immune system and allowed to produce substantial tumors, 60% of the tumors simply disappear when treated with E1B-deficient adenovirus, and do not reappear later. Initial clinical trials are very encouraging.

6. Stepping on the Gas. Cell division starts with replication of the DNA. In healthy cells, another tumor suppressor keeps the gas tank nearly empty for the DNA replication process by inhibiting production of an enzyme called telomerase. Without this enzyme, a cells chromosomes lose material from their tips, called telomeres. Every time a chromosome is copied, more tip material is lost. After some thirty divisions, so much is lost that copying is no longer possible. Cells in the tissues of an adult human have typically undergone twenty five or more divisions. Cancer cant get very far with only the five remaining cell divisions, so inhibiting telomerase is a very effective natural break on the cancer process. It is thought that almost all cancers involve a mutation that destroys the telomerase inhibitor, releasing this break and making cancer possible. It should be possible to block cancer by reapplying this inhibition. Cancer therapies that inhibit telomerase are just beginning clinical trials.

Preventing the Spread of Cancer

7. Tumor Growth. Once a cell begins cancerous growth, it forms an expanding tumor. As the tumor grows ever-larger, it requires an increasing supply of food and nutrients, obtained from the bodys blood supply. To facilitate this necessary grocery shopping, tumors leak out substances into the surrounding tissues that encourage angiogenesis, the formation of small blood vessels. Chemicals that inhibit this process are called angiogenesis inhibitors. In mice, two such angiogenesis inhibitors, angiostatin and endostatin, caused tumors to regress to microscopic size. This very exciting result has proven controversial, but initial human trials seem promising.

8. Metastasis. If cancerous tumors simply continued to grow where they form, many could be surgically removed, and far fewer would prove fatal. Unfortunately, many cancerous tumors eventually metastasize, individual cancer cells breaking their moorings to the extracellular matrix and spreading to other locations in the body where they initiate formation of secondary tumors. This process involves metal-requiring protease enzymes that cleave the cell-matrix linkage, components of the extracellular matrix such as fibronectin that also promote the migration of several noncancerous cell types, and RhoC, a GTP-hydrolyzing enzyme that promotes cell migration by providing needed GTP. All of these components are necessary for metastasis to occur, and all offer promising targets for future anti-cancer therapy.

Therapies such as those described here are only part of a wave of potential treatments under development and clinical trial. The clinical trials will take years to complete, but in the coming decade we can expect cancer to become a curable disease.

Understanding of how mutations produce cancer has progressed to the point where promising potential therapies can be tested.