Gaps in the Fossil Record

This is not to say that the fossil record is complete. Given the low likelihood of fossil preservation and recovery, it is not surprising that there are gaps in the fossil record. Nonetheless, paleontologists (the scientists who study fossils) continue to fill in the gaps in the fossil record. While many gaps interrupted the fossil record in Darwin’s era, even then, scientists knew of the Archaeopteryx fossil transitional between dinosaurs and birds. Today, the fossil record is far more complete, particularly among the vertebrates; fossils have been found linking all the major groups. Recent years have seen spectacular discoveries closing some of the major remaining gaps in our understanding of vertebrate evolution. For example, recently a four-legged aquatic mammal was discovered that provides important insights concerning the evolution of whales and dolphins from land-living, hoofed ancestors (figure 3). Similarly, a fossil snake with legs has shed light on the evolution of snakes, which are descended from lizards that gradually became more and more elongated with simultaneous reduction and eventual disappearance of the limbs.

On a finer scale, evolutionary change within some types of animals is known in exceptional detail. For example, about 200 million years ago, oysters underwent a change from small curved shells to larger, flatter ones, with progressively flatter fossils being seen in the fossil record over a period of 12 million years (figure 4). A host of other examples all illustrate a record of successive change. The demonstration of this successive change is one of the strongest lines of evidence that evolution has occurred.

The fossil record provides a clear record of the major evolutionary transitions that have occurred through time. 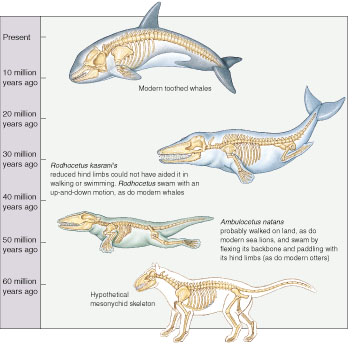 Whale “missing links.”The recent discoveries of Ambulocetus and Rodhocetus have filled in the gaps between the mesonychids, the hypothetical ancestral link between the whales and the hoofed mammals, and present-day whales. 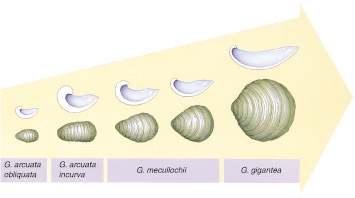 Evolution of shell shape in oysters.Over 12 million years of the Early Jurassic Period, the shells of this group of coiled oysters became larger, thinner, and flatter. These animals rested on the ocean floor in a special position called the “life position,” and it may be that the larger, flatter shells were more stable in disruptive water movements.