The Evolution of Horses

One of the best studied cases in the fossil record concerns the evolution of horses. Modern-day members of the Equidae include horses, zebras, donkeys and asses, all of which are large, long-legged, fast-running animals adapted to living on open grasslands. These species, all classified in the genus Equus, are the last living descendants of a long lineage that has produced 34 genera since its origin in the Eocene Period, approximately 55 million years ago. Examination of these fossils has provided a particularly well-documented case of how evolution has proceeded by adaptation to changing environments.

The earliest known members of the horse family, species in the genus Hyracotherium, didn’t look much like horses at all. Small, with short legs and broad feet (figure 5), these species occurred in wooded habitats, where they probably browsed on leaves and herbs and escaped predators by dodging through openings in the forest vegetation. The evolutionary path from these diminutive creatures to the workhorses of today has involved changes in a variety of traits, including:

Size. The first horses were no bigger than dogs, with some considerably smaller. By contrast, modern equids can weigh more than a half ton. Examination of the fossil record reveals that horses changed little in size for their first 30 million years, but since then, a number of different lineages exhibited rapid and substantial increases. However, trends toward decreased size were also exhibited among some branches of the equid evolutionary tree (figure 6).

Toe Reduction. The feet of modern horses have a single toe, enclosed in a tough, bony hoof. By contrast, Hyracotherium had four toes on its front feet and three on its hindfeet. Rather than hooves, these toes were encased in fleshy pads. Examination of the fossils clearly shows the transition through time: increase in length of the central toe, development of the bony hoof, and reduction and loss of the other toes (figure 7). As with body size, these trends occurred concurrently on several different branches of the horse evolutionary tree. At the same time as these developments, horses were evolving changes in the length and skeletal structure of the limbs, leading to animals capable of running long distances at high speeds.

Tooth Size and Shape. The teeth of Hyracotherium were small and relatively simple in shape. Though time, horse teeth have increased greatly in length and have developed a complex patter o ridges on their molars and premolars (figure 7).

The effect of these changes is to produce teeth better capable of chewng tough gritty vegetation, such as grass, which tends to wear teeth down. Accompanying these changes have been alterations in the shape of the skull that strengthened the skull to 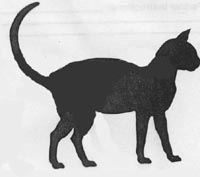 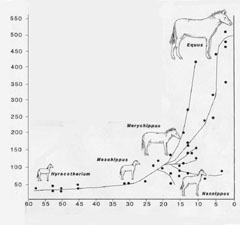 Millions of years ago

Evolutionary change in body size of horses. Lines show the broad outline of evolutionary relationships. Although most change involved increases in size, some decreases also occurred.

withstand the stresses imposed by continual chewing. As with body size, evolutionary change has not been constant through time. Rather, much of the change in tooth shape has occurred within the past 20 million years.

All of these changes may be understood as adaptations to changing global climates. In particular, during the late