Humans have imposed selection upon plants and animals since the dawn of civilization. Just as in natural selection, artificial selection operates by favoring individuals with certain phenotypic traits, allowing them to reproduce and pass their genes into the next generation. Assuming that phenotypic differences are genetically determined, such selection should lead to evolutionary change and, indeed, it has. Artificial selection, imposed in laboratory experiments, agriculture, and the domestication process, has produced substantial change in almost every case in which it has been applied. This success is strong proof that selection is an effective evolutionary process.

With the rise of genetics as a field of science in the 1920’s and 1930’s, researchers began conducting experiments to test the hypothesis that selection can produce evolutionary change. A favorite subject was the now-famous laboratory fruit fly, Drosophila melanogaster. Geneticists have imposed selection on just about every conceivable aspect of the fruit flyincluding body size, eye color, growth rate, life span, and exploratory behaviorwith a consistent result: selection for a trait leads to strong and predictable evolutionary response.

Similar experiments have been conducted on a wide variety of other laboratory organisms. For example, by selecting for rats that were resistant to tooth decay, scientists were able to increase in less than 20 generations the average time for onset of decay from barely over 100 days to greater than 500 days.

Similar methods have been practiced in agriculture for many centuries. Familiar livestock, such as cattle and pigs, and crops, like corn and strawberries, are greatly different from their wild ancestors (figure 22.13). These differences have resulted from generations of selection for desirable traits like milk production and corn stalk size.

Artificial selection in the laboratory. In this experiment, one population of Drosophila was selected for low numbers of bristles and the other for high numbers. Note that not only did the means of the populations change greatly in 35 generations, but also that all individuals in both experimental populations lie outside the range of the initial population. 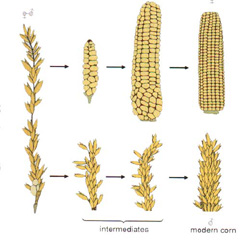 Corn looks very different from its ancestor. The tassels and seeds of a wild grass, such as teosinte, evolved into the male tassels and female ears of modern corn.

change in crop plants. In 1896, agricultural scientists began selecting on oil content of corn kernels, which initially was 4.5%. As in the fruit fly experiments, the top 20% of all individuals were allowed to reproduce. In addition, a parallel experiment selected for the individuals with the lowest oil content. By 1986, at which time 90 generations had passed, average oil content had increased approximately 450% in the high content experiment; by contrast, oil content in the low experiment had decreased to about 0.5%, a level at which it is difficult to get accurate readings. ©Txtwriter Inc.