Dozens of other species of moths have changed in the same way as the peppered moth in industrialized areas throughout Eurasia and North America, with dark forms becoming more common from the mid-nineteenth century onward as industrialization spread.

In the second half of the twentieth century, with the widespread implementation of pollution controls, these trends are reversing, not only for the peppered moth in many areas in England, but also for many other species of moths throughout the northern continents. These examples provide some of the best documented instances of changes in allelic frequencies of natural populations as a result of natural selection due to specific factors in the environment.

In England, the pollution promoting industrial melanism began to reverse following enactment of Clean Air legislation in 1956. Beginning in 1959, the Biston population at Caldy Common outside Liverpool has been sampled each year. The frequency of the melanic (dark) form has dropped from a high of 94% in 1960 to its current (1994) low of 19% (figure 22.11). Similar reversals have been documented at numerous other locations throughout England. The drop correlates well with a drop in air pollution, particularly with tree-darkening sulfur dioxide and suspended particulates.

Interestingly, the same reversal of industrial melanism appears to have occurred in America during the same time that it was happening in England. Industrial melanism in the American subspecies of the peppered moth was not as widespread as in England, but it has been well-documented at a rural field station near Detroit. Of 576 peppered moths collected there from 1959 to 1961, 515 were melanic, a frequency of 89%. The American Clean Air act, passed in 1963, led to significant reductions in air pollution. Resampled in 1994, the Detroit field station peppered moth population had only 15% melanic moths (see figure 22.11)! The moths in Liverpool and Detroit, both part of the same natural experiment, exhibit strong evidence of natural selection.

Reconsidering the Target of Natural Selection

Tutt’s hypothesis, widely accepted in the light of Kettlewell’s studies, is currently being reevaluated. The problem is that the recent selection against melanism does not appear to correlate with changes in tree lichens. At Caldy Common, the light form of the peppered moth began its increase in frequency long before lichens began to reappear on the trees. At the Detroit field station, the lichens never changed 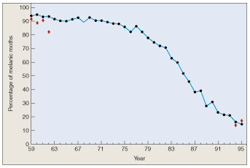 Selection against melanism.The circles indicate the frequency of melanic Biston moths at Caldy Common in England, sampled continuously from 1959 to 1995. Diamonds indicate frequencies in Michigan from 1959 to 1962 and from 1994 to 1995.

significantly as the dark moths first became dominant and then declined over the last 30 years. In fact, investigators have not been able to find peppered moths on Detroit trees at all, whether covered with lichens or not. Wherever the moths rest during the day, it does not appear to be on tree bark. Some evidence suggests they rest on leaves on the treetops, but no one is sure.

The action of selection may depend less on the presence of lichens and more on other differences in the environment resulting from industrial pollution. Pollution tends to cover all objects in the environment with a fine layer of particulate dust, which tends to decrease how much light surfaces reflect. In addition, pollution has a particularly severe effect on birch trees, which are light in color. Both effects would tend to make the environment darker and thus would favor darker color in moths.

Natural selection has favored the dark form of the peppered moth in areas subject to severe air pollution, perhaps because on darkened trees they are less easily seen by moth-eating birds. Selection has in turn favored the light form as pollution has abated.