When the environment changes, natural selection often may favor new traits in a species. The example of the Darwin’s finches clearly indicates how natural variation can lead to evolutionary change. Humans are greatly altering the environment in many ways; we should not be surprised to see organisms attempting to adapt to these new conditions. One classic example concerns the peppered moth, Biston betularia. Until the mid-nineteenth century, almost every individual of this species captured in Great Britain had light-colored wings with black specklings (hence the name “peppered” moth). From that time on, individuals with dark-colored wings increased in frequency in the moth populations near industrialized centers until they made up almost 100% of these populations. Black individuals had a dominant allele that was present but very rare in populations before 1850. Biologists soon noticed that in industrialized regions where the dark moths were common, the tree trunks were darkened almost black by the soot of pollution. Dark moths were much less conspicuous resting on them than were light moths. In addition, the air pollution that was spreading in the industrialized regions had killed many of the light-colored lichens on tree trunks, making the trunks darker.

Can Darwin’s theory explain the increase in the frequency of the dark allele? Why did dark moths gain a survival advantage around 1850? An amateur moth collector named J. W. Tutt proposed what became the most commonly accepted hypothesis explaining the decline of the light-colored moths. He suggested that peppered forms were more visible to predators on sooty trees that have lost their lichens. Consequently, birds ate the peppered moths resting on the trunks of trees during the day. The black forms, in contrast, were at an advantage because they were camouflaged (figure 22.10). Although Tutt initially had no evidence, British ecologist Bernard Kettlewell tested the hypothesis in the 1950s by rearing populations of peppered moths with equal numbers of dark and light individuals. Kettlewell then released these populations into two sets of woods: one, near heavily polluted Birmingham, the other, in unpolluted Dorset. Kettlewell set up rings of traps around the woods to see how many of both kinds of moths survived. To evaluate his results, he had marked the released moths with a dot of paint on the underside of their wings, where birds could not see it.

In the polluted area near Birmingham, Kettlewell trapped 19% of the light moths, but 40% of the dark ones. This indicated that dark moths had a far better chance of surviving in these polluted woods, where the tree trunks were dark. In the relatively unpolluted Dorset woods, Kettlewell recovered 12.5% of the 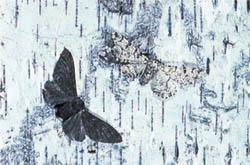 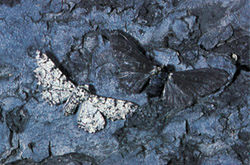 light moths but only 6% of the dark ones. This indicated that where the tree trunks were still light-colored, light moths had a much better chance of survival. Kettlewell later solidified his argument by placing hidden blinds in the woods and actually filming birds eating the moths. Sometimes the birds Kettlewell observed actually passed right over a moth that was the same color as its background.

Industrial melanism is a term used to describe the evolutionary process in which darker individuals come to predominate over lighter individuals since the industrial revolution as a result of natural selection. The process is widely believed to have taken place because the dark organisms are better concealed from their predators in habitats that have been darkened by soot and other forms of industrial pollution, as suggested by Kettlewell’s research.