Traces of our evolutionary past are also evident at the molecular level. If you think about it, the fact that organisms have evolved successively from relatively simple ancestors implies that a record of evolutionary change is present in the cells of each of us, in our DNA. When an ancestral species gives rise to two or more descendants, those descendants will initially exhibit fairly high overall similarity in their DNA. However, as the descendants evolve independently, they will accumulate more and more differences in their DNA. Consequently, organisms that are more distantly related would be expected to accumulate a greater number of evolutionary differences, whereas two species that are more closely related should share a greater portion of their DNA.

To examine this hypothesis, we need an estimate of evolutionary relationships that has been developed from data other than DNA (it would be a circular argument to use DNA to estimate relationships and then conclude that closely related species are more similar in their DNA than are distantly related species). Such an hypothesis of evolutionary relationships is provided by the fossil record, which indicates when particular types of organisms evolved. In addition, by examining the anatomical structures of fossils and of modern species, we can infer how closely species are related to each other.

When degree of genetic similarity is compared with our ideas of evolutionary relationships based on fossils, a close match is evident. For example, when the human hemoglobin polypeptide is compared to the corresponding molecule in other species, closely-related species are found to be more similar. Chimpanzees, gorillas, orangutans, and macaques, vertebrates thought to be more closely related to humans, have fewer differences from humans in the 146-amino-acid hemoglobin b-chain than do more distantly related mammals, like dogs. Nonmammalian vertebrates differ even more, and nonvertebrate hemoglobins are the most different of all (figure 18). Similar patterns are also evident when the DNA itself is compared. For example, chimps and humans, which are thought to have descended from a common ancestor that lived approximately 6 million years ago, exhibit few differences in their DNA. 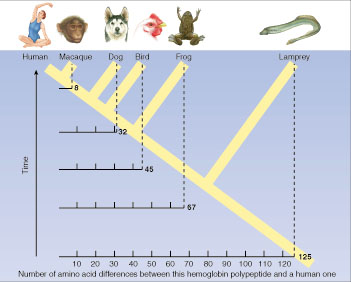 Why should closely related species be similar in DNA? Because DNA is the genetic code that produces the structure of living organisms, one might expect species that are similar in overall appearance and structure, such as humans and chimpanzees, to be more similar in DNA than are more dissimilar species, such as humans and frogs. This expectation would hold true even if evolution had not occurred. However, there are some non-coding stretches of DNA (sometimes called “junk DNA”) that have no function and appear to serve no purpose. If evolution had not occurred, there would be no reason to expect similar appearing species to be similar in their junk DNA. However, comparisons of such stretches of DNA provide the same results as for other parts of the genome: more closely related species are more similar, an observation that only makes sense if evolution has occurred.

Comparison of the DNA of different species provides strong evidence for evolution. Species deduced from the fossil record to be closely related are more similar in their DNA than are species thought to be more distantly related.