Different geographical areas sometimes exhibit groups of plants and animals of strikingly similar appearance, even though the organisms may be only distantly related. It is difficult to explain so many similarities as the result of coincidence. Instead, natural selection appears to have favored parallel evolutionary adaptations in similar environments. Because selection in these instances has tended to favor changes that made the two groups more alike, their phenotypes have converged. This form of evolutionary change is referred to as convergent evolution, or sometimes, parallel evolution.

In the best known case of convergent evolution, two major groups of mammals, marsupials and placentals, have evolved in a very similar way, even though the two lineages have been living independently on separate continents. Australia separated from the other continents more than 50 million years ago, after marsupials had evolved but before the appearance of placental mammals. As a result, the only mammals in Australia (other than bats and a few colonizing rodents) have been marsupials, members of a group in which the young are born in a very immature condition and held in a pouch until they are ready to emerge into the outside world. Thus, even though placental mammals are the dominant mammalian group throughout most of the world, marsupials retained supremacy in Australia.

What are the Australian marsupials like? To an astonishing degree, they resemble the placental mammals living today on the other continents (figure 22.19). The similarity between some individual members of these two sets of mammals argues strongly that they are the result of convergent evolution, similar forms having evolved in different, isolated areas because of similar selective pressures in similar environments. 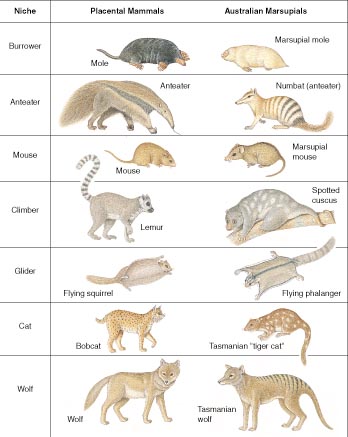 Convergent evolution. Marsupials in Australia resemble placental mammals in the rest of the world. They evolved in isolation after Australia separated from other continents.

How do we know when two similar characters are homologous and when they are analogous? As we have seen, adaptation favoring different functions can obscure homologies, while convergent evolution can create analogs that appear as similar as homologs. There is no hard and fast answer to this question; the determination of homologs is often a thorny issue in biological classification. As we have seen in comparing vertebrate embryos, and again in comparing slugs and squids, studies of embryonic development often reveal features not apparent when studying adult organisms. In general, the more complex two structures are, the less likely they evolved independently.