This was the year my friends got cancer. Carleen, who ran our household with love and efficiency, died of cancer. Vicki, Chip, Tom, and Mick all went under the knife and survive, but cancer is still very much part of their days, and mine. So I watch with considerable excitement the parade of promising cancer therapy results being reported in recent months. What follows is a brief catalog of these advances, many treated in previous columns.

Preventing the DIVIDE signal from reaching the nucleus

Every cancer begins with a signal that tells a cell to divide. Researchers are having considerable success attempting to block this signal from entering the cell and passing to the cell nucleus, where the decision to divide is taken. The molecular journey from cell surface inward to the nucleus presents many opportunities to block the signal, all being explored. The most promising results are being obtained at the beginning of this journey, when the cell first receives the signal to divide.

The “divide” signal is usually a small protein called a growth factor that zeros in on special receptors on the cell surface. Mutations that increase the number of receptors amplify the division signal and so lead to cancer. Over 20% of breast cancer tumors overproduce such a receptor. Researchers have created proteins called monoclonal antibodies that seek out and stick to these excess receptors. Like waving a red flag, their presence calls down attack by the immune system, destroying the potential cancer cell. Genentech’s version, “herceptin”, has given promising results in early clinical tests. Similar monoclonals directed against colon and lung cancer, dubbed C225 and described in this column last May, are just now entering trials.

Preventing the replication of nuclear DNA

The complex molecular machinery in the nucleus that replicates the cell’s DNA will not perform, even after receiving a “divide” signal, without a “go ahead” from its quality control checker. A protein called p53 inspects the physical integrity of the DNA to insure it is not damaged or foreign. When p53 detects trouble, it puts the copying machinery on “hold” and activates the cell’s repair systems. After a bit, if repair fails, it pulls the plug and orders the cell killed. Cancer-causing mutations are either repaired or the cell containing them eliminated.

When mutations destroy p53, the cell’s primary defense against cancer is removed. 50% of all cancers have a disabled p53, and 70-80% of lung cancers — tragically, the benzo(a)pyrene in cigarette smoke zeros in especially on p53. The hereditary breast cancer gene BRCA1 was reported this week in the journal CELL to facilitate cancer by blocking p53 action.

Researchers are perfecting a revolutionary therapy targeted at cancer cells with disabled p53. They infect the cells with a cold virus called adenovirus that cannot grow 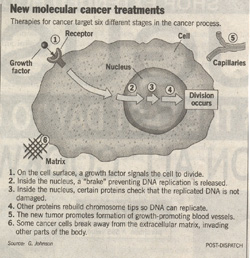 in normal cells because p53 detects its presence and stops the infection in its tracks. In cancer cells lacking p53, however, the virus grows unchecked, killing the cells! In 60% of mice harboring substantial human colon and lung cancer tumors, the tumors simply disappear after this virus treatment, as described in this column last November. Recently announced early clinical trials are encouraging.

Because chromosomes loose a bit of their tips each time they divide, those of adult human cells have only a smidgen left, and can divide only a few more times. For cancer to occur, an enzyme called telomerase must add tip material back, as described in this column last December. Experimental therapies are attempting to block cancer by inhibiting this enzyme.

Once a cell begins cancerous growth, it forms an expanding tumor, its growth fueled by materials it steals from the body’s blood supply. Tumors can be starved if the formation of small blood vessels around them (called angiogenesis) can be blocked. Chemicals that do this, such as the angiostatin described in this column last October, cause tumors in mice to regress to microscopic size. Initial human trials look promising.

The final tragic stage of cancer– what makes most cancers fatal — occurs when cancer cells break loose from the tumor and spread through the body, a process called metastasis. Screening using gene array biochips, reported last week in the journal SCIENCE, suggests that this process involves (1) special protein-eating enzymes that free the cell from the forest of fibers in which it is embedded, (2) materials used to assemble fibers that transport the cell elsewhere, and (3) RhoC, an enzyme that activates cell migration. All three components are necessary for metastasis to occur, and all offer promising targets for future anti-cancer therapy.

Therapies such as those described here are only part of a wave of potential treatments under development and clinical trial. The clinical trials will take years to complete, but we seem to be fast approaching the day when cancer will be a curable disease.