Like a seed fallen on hard ground, the theory of evolution has not taken hold in America’s heartland. Evolution is given only passing mention in Missouri’s state educational standards, and no mention at all in those of our neighboring states Illinois and Kansas. While scientists like me can object — I wrote five columns on the subject last year (you can read them at http://txtwriter.com)– the uncomfortable fact is that the absence of Darwin in our public schools in fact reflects the belief of many Midwesterners.

Now another powerful tool has been fashioned by Darwin’s critics. In Rochester, New York, a publicly financed charter school scheduled to open next fall has announced plans to teach the theory of creationism as an alternative to the theory of evolution.

Charter schools are financed with public funds and are tuition-free, but operate outside the normal school system bureaucracy. Charter schools now enroll more than a quarter million students across the United States.

The Rochester school’s sponsor, John R. Walker, is an assistant professor at Roberts Wesleyan College, a Christian college in Rochester, and a pastor of the Faith Christian Center church. It is necessary for his charter school to present creationism as an alternative to evolution, Mr. Walker says, because “the theory of evolution is unproven.”

The school is one of 22 operated by National Heritage Academies, a Michigan company. Its senior vice president Mark DeHaan admits that the company did not mention creationism in the curriculum it presented to New York regulators, but says “I think it’s inappropriate to teach evolution as `This is reality.’ We have to teach evolution as a theory, and…there are other theories out there.”

Statements like these reflect the ignorance of science that results from not teaching it properly in our schools. To say that evolution is just a theory implies that evolution is some kind of guess. Scientists, however, use the word theory in a very different sense than the general public does. To a scientist, theories are the solid ground of science, that of which we are most certain. Few of us doubt the theory of gravity because it is “just a theory.”

But Walker’s contends that “the theory of evolution is unproven” and so is not on the same solid ground as gravity or other scientific theories. Is he right?

No, he’s not. The theory of evolution by natural selection is supported by an enormous body of scientific data, and is accepted as fully demonstrated in every country in the world save our own. While the details of the evidence supporting Darwin are sometimes technical, the general nature of the evidence is easy to understand:

1. The Fossil Record. How can we be sure that differences in a bunch of fossils reflects evolution and not wishful thinking? The way to test the hypothesis that evolution has occurred is to resist the natural temptation to start by looking at the details of the fossils, and instead very carefully date each fossil. This almost always involves radioactive dating, usually measuring the degree to which potassium isotopes decay to argon. Radioactive dating is very reliable, and has a solid theoretical basis in physics. When all the fossils have been dated, then you arrange the fossils in the order of their age. Now you are ready to look at the fossils. What scientists see when they do this, time and again, is clear evidence of directional changes, of successive evolution. Thus when scientists date and then examine fossils of titanotheres, hoofed mammals that lived 50 to 35 million years ago, they see that a small bony knob located above the nose steadily evolves over a period of 15 million years from small nubbins to medium-sized horns and eventually to large blunt horns. The evolution of these horns is not a theory, but an observation. 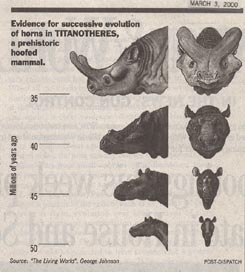 2. The Molecular Record. A record of evolutionary change is present in the cells of each of us, in our DNA. If Darwin is right, evolution over long periods of time involves a continual accumulation of genetic changes in DNA as new versions of genes replace old ones through natural selection. Organisms that are more distantly related would be expected to have accumulated a greater number of evolutionary differences. When scientists look, time and again that is what they see. The hemoglobin genes of apes have fewer differences from humans than do more distantly related mammals like dogs. Birds differ more, fish even more, and nonvertebrate hemoglobin genes like those of worms are the most different of all. The more distantly related two organisms are, the greater the number of DNA differences. The descent of particular DNA changes can be traced through the family tree. As was true with fossils, evolution at the molecular level is not a theory, but an observation.

While there is a wealth of other evidence supporting evolution, you can see the point. Evolution is not “unproven.” It is as solidly supported by evidence as science can be.

Laws mandating the teaching of creationism in public schools as an alternative to evolution were ruled unconstitutional by the Supreme Court in 1987, which found creationism to be religion rather than science. But nothing prevents charter schools from doing so, as long as regulators don’t forbid it. They should.