Their basic argument, although phrased in modern biochemical terms, is not a new one. It is the classic “argument from design” first proposed nearly 200 years ago by William Paley in his book Natural Theology. The existence of a watch, Paley argued, is prima face evidence of a watchmaker. Similarly, creationists say, organs like the mammalian ear are too complex to be due to blind evolution. There must have been a designer. They dub this analysis “intelligent design theory.”

This argument, so appealing in its simplicity, has been rejected by science because the evidence that complex organs have evolved is plain to see. The progressive evolution of the mammalian ear, for example, is well documented in the fossil record. Its three tiny bones originate from the reptile lower jaw, gradually reducing in size as more advanced mammals evolve, eventually migrating into the skull where we now find them in present-day mammals carrying vibrations across the middle ear.

The intelligent design argument in its new molecular guise is articulated by Lehigh University biochemistry professor Michael Behe in his book Darwin’s Black Box: The Biochemical Challenge to Evolution.

Behe argues that the intricate molecular machinery of our cells is so elaborate, our body processes so interconnected, that they cannot be explained by evolution from simpler stages in the way that Darwinists explain the evolution of the mammalian ear. They are “irreducibly complex.”

Behe defines an irreducibly complex system as “a single system composed of several well-matched, interacting parts that contribute to the basic function, wherein the removal of any one of the parts causes the system to effectively cease functioning.” Each part plays a vital role. Remove just one, Behe emphasizes, and cell molecular machinery cannot function.

As an example of such an irreducibly complex system, Behe describes the series of more than a dozen blood clotting proteins that act in our body to cause blood to clot around a wound. Take out any step in the complex cascade of reactions that leads to coagulation of blood, says Behe, and your body’s blood would leak out from a cut like water from a ruptured pipe. Remove a single enzyme from the complementary system that confines the clotting process to the immediate vacinity of the wound, and all your lifeblood would harden. Either condition would be fatal.

The need for all the parts of such complex systems to work leads directly to the new creationist attack on Darwin’s theory of evolution by natural selection. Behe writes that “irreducibly complex systems cannot evolve in a Darwinian fashion.” Why not? Because natural selection can only act on changes that actually affect how an organism functions. If dozens of different proteins all must work correctly to clot blood, how could natural selection act to fashion any one of the individual proteins? No one protein does anything on its own, just as a portion of a watch doesn’t tell time. Behe argues that like Paley’s watch, the blood clotting system must have been designed all at once, as a single functioning machine.

What’s wrong with Behe’s argument, as evolutionary scientists have been quick to point out, is that each part of a complex molecular machine does not evolve by itself, despite Behe’s claim that it must. The several parts evolve together, in concert, precisely because evolution acts on the system, not its parts. 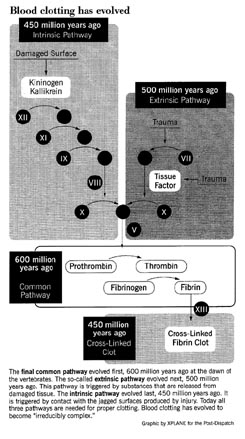 That’s the fundamental fallacy in Behe’s argument. Darwinian evolution can easily produce irreducible complexity. Natural selection can act on a complex system because at every stage of its evolution, the system functions. Parts that improve function are added, and, because of later changes, eventually become essential.

The mammalian blood clotting system, for example, has evolved in stages from much simpler systems. By comparing the amino acid sequences of the many proteins, biochemist Russell Doolittle has estimated how long it has been since each protein evolved. The core of the vertebrate clotting system, called the “common pathway”, evolved at the dawn of the vertebrates 600 million years ago, and is found today in lampreys, the most primitive fish.

As vertebrates evolved, proteins were added to the clotting system, improving its efficiency. The so-called “extrinsic pathway,” triggered by substances released from damaged tissues, was added 500 million years go. Each step in the pathway amplifies what goes before, so adding the extrinsic pathways greatly increases the amplification and thus the sensitivity of the system.

50 million years later a third component was added, the so-called “intrinsic pathway.” It is triggered by contact with the jagged surfaces produced by injury. Again, amplification and sensitivity were increased.

At each stage as the clotting system evolved to become more complex, its overall performance came to depend on the added elements. Mammalian clotting, which utilizes all three pathways, no longer functions if any one of them is disabled. Blood clotting has become “irreducibly complex” — as the result of Darwinian evolution.

Behe has claimed to have found a phenomenon that can’t be explained by Darwinism, and he’s wrong. The new “molecular” arguments of creationists just don’t hold water.