Science is an organized way of asking questions. Unfortunately, however, science doesn’t always give you the answer you want to hear. That was never more true than last week, when two rigorous studies involving thousands of people failed to find any protection from colon cancer by eating low-fat, high-fiber foods.

For most of my adult life it has been gospel that a proper diet, low in fat and high in fiber, would greatly reduce the risk of colon and rectal cancer, the second greatest cancer killers in the United States today. This year, 130,000 Americans will be diagnosed with colorectal cancer. One in five of them will die of the cancer. Being able to dodge this bullet by reasonable eating habits made my life seem a little safer, a little more under my own control.

The idea that colon cancer is linked to diet is usually credited to Denis Burkitt, a British missionary surgeon who reported in 1971 that colorectal cancer was rare among poor rural Africans. Perhaps, he suggested, this was because Africans had little meat in their diet. Instead of meat they ate a lot of fiber — fruits, grains, and vegetables.

Burkitt’s observation that colon cancer is associated with meat in the diet proved to be very general. Countries with low meat consumption, like Nigeria and Japan, typically have low rates of colon cancer, fewer than 5 cases per 100,000 people. Countries with high meat consumption, like the United States, Canada, and New Zealand, on the other hand, have six times higher rates of colon cancer, more than 30 cases per 100,000 people.

Because low-meat countries have diets rich in fiber, the idea that high fiber protects against colon cancer became a widely held belief of diet-conscious Americans. It was easy to image reasons why this might be so. Fiber makes food move faster through the intestine, reducing the time the colon is in contact with cancer-causing oxidative chemicals produced during digestion of food.

The results of human studies were less clear-cut. Some suggested protection by fiber, others did not. To sort the issue out, a major study was conducted involving 88,000 nurses. The lives of the nurses were not altered in any way by the investigators. They simply noted what the nurses ate, and who among them got colon cancer. To everyone’s amazement, eating high-fiber diets seemed to have nothing at all to do with who got colon cancer and who did not. 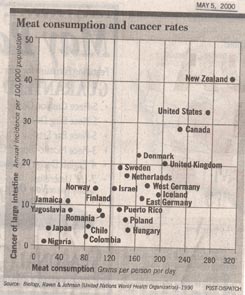 Could this result be explained away? Could those nurses who ate high-fiber diets happen to be different in some unsuspected way, a way that might have cancelled out the beneficial effects of the fiber? The rigorous studies reported last week in the New England Journal of Medicine were done to sort this out.

In one study, lasting four years, 2,079 people were randomly assigned diets. Some ate low-fat, high-fiber diets with lots of fruits, while others ate a more typical American diet. It didn’t make any difference. Those who ate the high fiber diets were just as likely to develop colon cancer as those who did not.

So what’s going on here? On the one hand, it seems clear that the amount of meat in the diet of a country is very predictive of colon cancer rates. On the other hand, high-fiber diets do not protect against colon cancer. How can these two observations be reconciled?

No obvious answer suggests itself. Colon cancer develops over years, starting as a small benign polyp on the inner wall of the large intestine produced by a mutation that disables a tumor suppressor gene. At least three more mutations are required to convert the polyp to a deadly carcinoma. In the studies reported last week, all the subjects had previously had at least one polyp removed from their colon. In other words, they were already on their way to having cancer, and the study tested if diet could halt the progression. Perhaps high-fiber diets only protect against the first mutation.

Or perhaps — horror to a steak lover like me — its something in meat that promotes colon cancer, not lack of fiber at all!