Mark Twain once said, “Picking up a cat by the tail teaches you something that can’t be learned any other way.” I know what he means. My particular cat is creationism. I picked it up last July 11 when I pointed out on this page that Missouri state education standards for science make hardly any mention of evolution, and those of Illinois none at all. It wasn’t until a month later, on August 11, that the Kansas board of education voted to remove evolution from state science standards, making headlines across the country. It is only chance that prevented Missouri from becoming the butte of jokes nationwide that Kansas has become.

The creationist cat knows how to scratch. My July column unleashed a ferocious response from readers who do not want evolution taught in Missouri schools. A barrage of letters, e mails, and phone calls, not all of them polite, suggested that Governor Carnahan had done well by appointing a standards committee that did such a good job of keeping Darwin out of Missouri classrooms. Most of my critics argued passionately for creationism, citing a litany of criticisms of evolution that proved to them that evolution was wrong. I responded to these criticisms in another column July 25, but like trying to shake a cat held by the tail, this only served to intensify the wave of criticism.

Very few letters came into the Post Dispatch supporting evolution, and that got me to thinking. Squeaky wheels generally get the oil, and maybe other states were like Missouri — allowing creationists to win by default. Because creationist groups are committed, well-organized and very vocal, they can have a strong political impact. It can be no accident that Governor Carnahan, who is not an uneducated man, chose the standards committee he did. The large body of better-informed Missouri citizens didn’t care enough to get involved, and did not complain loudly when the “evolution lite” state standards were sent to every Missouri school last year.

When I reviewed the science standards of other states, I found that my worry was well-founded. Evolution has been chopped out of the curriculum of not only the South, but also much of the Midwest. Evolution is not mentioned at all in the state science standards of Kansas, Illinois, Arkansas, Kentucky, Tennessee, Mississippi, and Georgia, and is given only the barest of mentions in Missouri, Florida, and South Carolina.

Alabama and soon Okalahoma manage to present a pretty good treatment of evolution in their state standards by the interesting tactic of throwing the religious right a bone — these two states attach a warning label onto their biology schoolbooks that evolution is “a controversial theory, which some scientists present as scientific explaination for the origin of living things.” The botom line, however, is that students in these two states are mandated to be tested on Darwinian evolution, while students in the midwest are not. 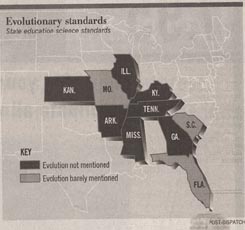 After much public discussion, the state education board of Nebraska recently voted 5-3 to include evolution in their new standards, as has Indiana, but both states may soon reconsider. Indiana Rep. Dennis Kruse said last month he is introducing a bill to end the teaching of evolution in Indiana schools, modeled on Kansas’ new curriculum standards. Kentucky teachers tried this year to get evolution back into their state standards, but last Wednesday the Kentucky Education Department edited out the word “evolution” from the new state standards.

This intellectual ozone hole about evolution reflects the very best and worst of our political system. It is not hard to write an excellent science standard that treats evolution as the core principle of biology. The Oklahoma state standard (you can read it on the internet at http://www.sde.state.ok.us/) is short, specific, and right to the point.

The difficulty is not in writing a good standard, but in having the political will to adopt it. Because creationists are politically active, they are succeeding in imposing their will on our nation’s education system. If we want to return decent science education to Missouri schools, we are going to have to get politically active too.

Every parent who wishes their children to get as good an education as kids in Oklahoma ought to say so, and loudly, to Governor Carnahan. He appoints the state education committee that sets Missouri science standards. Why not place on that committee college educators? It is they who will have to deal with the poorly-educated high school students the current committee is mandating. Why not appoint educators like the Chancellor of the University of Missouri, or of Washington University?

A friend from an east coast state wrote a letter to the governor of Kansas that could as well have gone to Carnahan, saying “Thank you Kansas for adopting evolution-free standards — it will make it so much easier for my children to compete with Kansas students for college admissions slots.”

Carnahan says he wants to be our next U.S. senator. Write and let him know that when you vote next year you will be thinking about his benign neglect of the quality of our kids’ science education. Carnahan can be e mailed at www.gov.state.mo.us/index.htm. The price of progress in a democracy is involvement. The creationists have learned this lesson. It is time we did too.