The countries of Europe are at war with mad cow disease. Last week the German government ordered the destruction of 400,000 cattle in a draconian attempt to halt the outbreak there. Two weeks ago, a program to destroy 25,000 cattle per week began in Ireland. The Irish expect to destroy 300,000 by June. Infected cows have also been reported this winter in herds in France, Denmark, Poland, Spain, and Italy. Entire herds are slaughtered when one member is found to be infected with mad cow disease. Overall, the European Union plans to eliminate 2 million potentially infected cattle by summer, at an estimated cost this year of $1 billion.

Why does the spectre of mad cow disease still loom over Europe? It has been over 15 years since the outbreak of mad cow disease in Britain led to the slaughter of fully a third of all the cows in Britain, 3.7 million animals. While warnings of the danger posed by infected cows came too late for British consumers, the other countries of Europe had not felt themselves at risk, because all of these countries had banned the import of British beef. In the 1990s, as British citizens began to die of the disease, the rest of Europe watched horrified, glad to have dodged the bullet. Only they hadn’t. 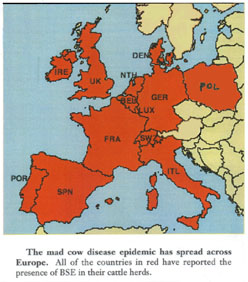