I visited Korea for a week at the end of May, a speaker at a world conference on Peace and the Environment, and was suprised to find myself questioned by almost everyone I met about the dangers of American food.  On walls everywhere in the city of Seoul there are posters showing a cute little girl holding a candle and saying “I don’t want to die from American beef.” On May 2 tens of thousands of protesters crowded downtown Seoul.  The conference speaker before me, Korean Prime Minister Han Seung-soo, was late, delayed by more street demonstrations.

What the people of Korea were so angry about was the Prime Minister’s decision a few weeks before to once again open Korea to the importation of American beef.  This story has its beginnings in our country on December 23, 2003, when the U.S. Department of Agriculture announced that a dairy cow in Washington state tested positive for bovine spongiform encephalopathy (BSE) or “mad cow disease,” an incurable and fatal disease. After this early alarm, two other cows in different herds also tested positive. The announcements were featured in many Korean news stories at the time. Reporters worldwide reminded viewers and readers about the massive slaughters of BSE-infected cows required to control an outbreak in the United Kingdom in the 1990sover a 15-year period, some 4.8 million animals were destroyed.

There was consternation in Asia, as there was in many parts of the world. BSE is believed to spread to humans when they consume BSE-tainted beef and cause a mad cow-like disease in humans called variant Creutzfeldt-Jakob Disease (vCJD), also incurable and fatal.

After the BSE outbreaks in the U.K. , safeguards had been put in place throughout Europe and North America to protect the food supply. The fact that even one cow could slip through these safeguards was a legitimate cause for concern.  Korea, along with Japan and Twian, quickly banned the import of American beef.  The Korean ban in particular was a considerable blow to the U.S. beef industry, as Korea was the third largest export market for U.S. beef producers, with $800 million in sales in 2003.

So what is this mad cow disease that so worries Koreans, and why aren’t we worried about it?

Mad cow disease is one of a group of deadly brain infections called transmissible spongiform encephalopathies (TSEs): transmissible because the disease can pass from one individual to another; spongiform because the brains of TSE infected individuals develop numerous small cavities as brain cells die, producing a marked spongy appearance; encephalopathy because the degeneration of the brain results in loss of neurological function and death. Other TSEs include scrapie in sheep, chronic wasting disease (CWD) in species of elk and deer, kuru, Creutzfeldt-Jakob disease (CJD), and vCJD in humans. Laboratory tests show that TSEs can be transmitted between individuals of a species by injecting infected brain tissue into a recipient animal’s brain or via tissue transplants. While the mode of TSE transmission among sheep and deer in nature is not yet known, TSEs have been shown to be spread among humans and cattle through food. The first TSE described in humans was kuru, a wasting disease common in the Fore people of Papua, New Guinea. Studies revealed that the Fore practiced ritual cannibalism, literally eating the brains of dead relatives. If the relative was infected with kuru, those who ate became infected.

Mad cow disease spread widely among the cattle herds of England in the 1990s because cows were fed bone meal prepared from cattle carcasses to increase the protein content of their diet. Like the Fore, British cattle were literally eating the nervous system tissue of cattle that had died of the disease. And, likewise, when humans eat hamburger or other meat contaminated with the nervous system tissue of infected cattle, they too seem to develop a human form of BSE, called vCJD. vCJD differs from CJD in the types of lesions formed and in the age of affected individuals. CJD is most frequently seen in the elderly but the average age of confirmed cases of vCJD is 28.

But what causes TSEs? To understand, we first have to learn a little bit about the large molecules of which cows, humans, and other organisms are composed. It turns out that TSEs are caused by one of them, a complex kind of molecule called a protein. In the 1960s, British researchers T. Alper and J. Griffith noted that infectious TSE preparations remained infectious even after exposure to radiation that would destroy the DNA of viruses or bacteria. DNA is another large molecule, the one that contains the information cells use to assemble proteins. At that time, DNA was thought to be the only way infectious diseases were passed from one individual to another, through transfer of viral or bacterial DNA. Because protein molecules are resistant to the high levels of radiation that Alper & Griffith used in their experiments, this resistance led Alper and Griffith to suggest that the TSE infectious agent was a protein.

But how could the problem arise from a protein, but not from the DNA that stores the information in the cell saying what the protein is to be like? Perhaps, they speculated, the protein has to fold in a certain way to work correctly, but could sometimes misfold, and then induce other proteins to do the same, the misfolding spreading like a chain reaction. The misfolded protein might function differently from the normal protein, causing changes that lead to cell death in the brain.

This heretical suggestiona communicable disease not caused by DNAwas not accepted by the scientific community. However, in the early 1970s, American physician Stanley Prusiner began to study TSEs. Like Alper and Griffith, Prusiner could find no evidence of DNA in the infectious TSE preparations he studied, and he concluded, as they had, that the infectious agent was a protein. In a 1982 paper he named this infectious agent a prion, for “proteinaceous infectious particle.”

Prusiner went on to isolate a distinctive prion protein, and for two decades, in the face of unremitting criticism from the scientific comminity, Prusiner continued to amass evidence that these prions play a key role in triggering TSEs. For example, when Prusiner injected prions of different abnormal conformations into several different hosts, these hosts developed prions with the same abnormal conformations as the parent prions. Other researchers showed that mice genetically engineered to lack Prusiner’s prion protein are immune to TSE infection. However, if brain tissue with the prion protein is grafted into the mice, the grafted tissuebut not the rest of the braincan then be infected with TSE. Prusiner received the 1997 Nobel Prize in physiology or medicine for his work on prions. 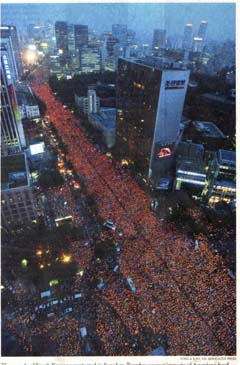 Clearly something is wrong with Prusiner’s prion proteins. The challenge in understanding mad cow disease is in understanding what is wrong with them.  Over the last century, and particularly since the advent of DNA biology in the 1950s, scientists had become accustomed to associating defective proteins with damaged genes:  A virus or microbe causes a communicable disease by introducing their genes into your body, genes which direct the production of proteins with functions that harm you.   But no one had ever until now encountered a communicable disease caused by a protein but not by a gene. How could a change in a protein be transmitted from one individual to another without a change in the gene saying what the protein was like?

Success in solving the puzzle of mad cow disease came with understanding that it is the shape of a protein that determines how it behaves within human cells, and that it is possible to alter a protein’s shape without altering its physical makeup.  In much the same way you can alter how people respond to meeting you by changing not what clothingyou wear, but how you wear it — imagine wearing your undershorts outside your pants, for instance.

How can a protein’s shape be atered?  Scientists have long known that within your cells certain proteins are often able to bend into several alternative shapes, some functional and others not. So-called chaperone proteins in the cell guide the folding process towards the functional form. It now appears that the prions that cause mad cow disease act in the brain as chaperones, inducing other proteins to fold as they themselves have done. Unfortunately, because the mad cow prions are folded incorrectly, they guide these other proteins to make the same folding mistake. The misfolded proteins then go on to instruct still other proteins to misfold, spreading the problem.

The prions that cause mad cow disease have been refolded from a normal, functional shape called PrPC, into a deadly form called PrPSc. PrPC is a so-called “transmembrane protein,” that is, a protein that is embedded within the membrane of brain cells. The portion of the PrPC protein that is embedded in the membrane has the shape of a helix, a spiral staircase. It seems the conversion of PrPC to PrPSc involves the refolding of these helical portions into rolling sheets. Once refolded, PrPSc proteins then interact with other PrPC proteins, inducing the refolding of their helices into sheets. It is this radical change in the shape of these membrane-embedded portions that alters the overall shape and function of mad cow prion proteins, leading to cell death in affected brain cells.

It is hoped that the increasing knowledge of prions and how they function will lead to diagnostic tools and treatments that prevent the conversion of the normal PrPC to PrPSc , or that trigger the immune system to identify and fight prions before they enter the nervous system and inflict harm.  Identifying carriers before clinical symptoms show up would be a massive improvement in our ability to test our U.S. cattle for the potential presence of mas cow disease.  Currently only a very tiny fraction of cows are tested, an expensive and slow procedure.  An inexpensive quick diagnostic tool that does not harm the cow is what is needed.

In the meantime there are a lot of worried Koreans, still concerned about the mad cow disease discovered in U.S. herds in 2003.  Until large scale testing becomes practical, the Korean Prime Minister has suggested a stop-gap measure, the same one already adopted by Japan and Taiwan: ban only the meat from older cattle, as cows 30 months or older seem more susceptible to mad cow disease.  This seems to me a poor safeguard at best, as the disease simply may not have had enough time to produce symptoms in younger cows.  However, this ban on older cows is the compromise on offer at the moment.  The cattle industry likes it, as the ban actually involves little added cost to the producer — less than 3% of the beef exported from the U.S. to Korea in 2003 came from cows 30 months or older.  Koreans like the compromise less, and continue to demonstrate.  Today. as I write these words, 80,000 are demonstrating in Seoul and the Korean Prime Minister and his entire cabinet have tended their resignations in an attempt to calm the public outcry.  Clearly, Koreans take the matter of proper testing of beef for mad cow disease very seriously, and are not inclined to compromise by limiting imports to young cows.

If limiting consumption to cows under 30 months indeed offers a safer approach, then perhaps you may wish to reconsider your next trip to McDonalds, as while the U.S. is exporting its younger beef overseas, we are eating the rest.  Some 20% of the beef that Americans eat comes from cows over 30 years old, mostly in the form of hamburger.