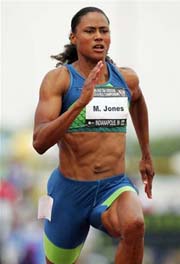 Like so  many others, I have been addicted  to  the Bejing Olympics, watching  every evening  for the last ten days.  NBC has been unable to resist flashing the medal count every day,  of course — at the moment we are ahead in the total count by a few medals, with China at our heels.  It would be  good not to focus on the medals, but for some ignoring medals must be very hard.   I am thinking particularly of Marion Jones.  She won five medals in the 2000 Sydney Olympics.  Seven years later, on September 8, 2007, she returned them to the IOC and six months after that entered Carswell  Federal Prison in Fort Worth, Texas.  She is scheduled to be released from there September 5, two weeks after the close of the Bejing Olympics.  Her crime?  She took performance-enhancing drugs  before the 2000 Olympics, and lied about it under oath.

She isn’t the only Olympic  athlete to have been linked  to anabolic steroid abuse, of course.  In those same 2000 games, Antonio Pettigrew’s track gold medal was returned to the IOC  for the same reason.  After the drug scandals of the  2000  Olympics, the IOC began to take anabolic steroid screening a lot more seriously.   Before the 2004 Athens games, fully 19 athletes failed IOC-administered drug  tests, and in this Olympics the dragnet has widened further and  37 athletes have been disqualified., far more than in any previous Olympics.   U.S. swimmer Jessica Hardy withdrew from our team after a positive drug test, and is appealing a two-year ban.

Why do  anabolic steroid s enhance Olympic performance, and why do some athletes feel they will be able to  beat random drug tests when using them?

Anabolic steroids were developed in the 1930s to treat hypogonadism, a condition in which the male testes do not produce sufficient amounts of the hormone testosterone for normal growth and sexual development. Scientists soon discovered that by slightly altering the chemical structure of testosterone, they could produce synthetic versions, like the two structures shown in the diagram, that facilitated the growth of skeletal muscle in laboratory animals. The word “anabolic” means growing or building. Further tweaking reduced the added impact of these new chemicals on sexual development. More than 100 different anabolic steroids have been developed, most of which have to be injected to be effective. All require a prescription to be used legally in the United States, and all are banned in professional, college, and high school sports.

Another way to increase the body’s level of testosterone is to use a chemical which is not itself anabolic but which the body converts to testosterone. One such chemical is 4-androstenedione, more com-monly called “andro.” First developed in the 1970s by East German scientists to try to enhance their athletes’ Olympic performances, andro is legally available as it does not have the same side effects as anabolic steroids. It is banned in most sports, although until recently allowed in professional baseball (Mark McGwire used it).

Anabolic steroids work by signalling muscle cells to make more protein. They bind to special “androgenic receptor” proteins within the cells of muscle tissue. Like jabbing these proteins with a poker, the binding prods the receptors into action, causing them to activate genes on the cell’s chromosomes that produce muscle tissue proteins, triggering an increase in protein synthesis. At the same time, the anabolic steroid molecules bind to so-called “cortisol receptor” proteins in the cell, preventing these receptors from doing their job of causing protein breakdown, the muscle cell’s way of suppressing inflammation and promoting the use of proteins for fuel during exercise. By increasing protein production and inhibiting the breakdown of proteins in muscle cells after workouts, anabolic steroids significantly increase the mass of an athlete’s muscle tissue.  Of the 37 olympic athletes disqualified in Bejing for anabolic steroid use, 22 were weight lifters.

If the only effect of anabolic steroids on your body was to enhance your athletic performance by increasing your muscle mass, using them would still be wrong, for one very simple and important reason: fairness. To gain advantage in competition by concealed use of anabolic steroids“doping”is simply cheating. That is why these drugs are banned in sports.

The use of anabolic steroids by athletes and others is not only wrong, but also illegal, because increased muscle mass is not the only effect of using these chemicals. Among adolescents, anabolic steroids can also lead to premature termination of the adolescent growth spurt, so that for the rest of their lives users remain shorter than they would have been without the drugs. Adolescents and adults are also affected by steroids in the following ways. Anabolic steroids can lead to potentially fatal liver cysts and liver cancer (the liver is the organ of the body that attempts to detoxify the blood), cholesterol changes and hypertension (both of which can promote heart attack and stroke), and acne. Other signs of steroid use in men include reduced size of testicles, balding, and development of breasts.  In women, signs include the growth of facial hair, lowering of the voice, and cessation of menstruation.

All of this was no mystery to the IOC before the 2000  Sydney Olympics.   So how did Marion Jones and Antonio Pettigrew slip by the extensive steroid screening that the IOC  had put in place? Jones, Pettigrew and presumably other athletes were using a new performance-enhancing anabolic steroid undetectable by standard antidoping tests, tetrahydrogestrinone (THG). The use of THG , known as “the clear,” was only discovered because an anonymous coach sent a spent syringe to U.S. antidoping officials in the fall of 2003. THG’s chemical structure is similar to gestrinone, a drug used to treat a form of pelvic inflammation, and can be made from it by simply adding four hydrogen atoms, an easy chemical task. THG tends to break down when prepared for analysis by standard means, which explains why antidoping tests had failed to detect it.  Perhaps not surprisingly, it is the new urine test for THG developed after the 2004  Athens Olympics  that is snagging the steroid-using  Bejing athletes.

I imagine they thought they were in no danger of being caught, and more than Marion Jones did.   I think she was courageous for finally admitting what she had done, and has certainly been punished enough,  but drawing attention to her remains important, because sure as rain is wet some other new designer anabolic steroid will surface in coming years, and it is important that anyone tempted to use it focus on Marion Jones’s Olympic experience, and on the surety that any drug one scientist can invent, another scientist can develop a test for.