The dinosaurs were the dominant terrestrial vertebrates until they abruptly disappeared 65 million years ago.

Dinosaurs had a variety of unique skeletal and physiological characteristics.

Dinosaurs can be categorized into six basic body designs. 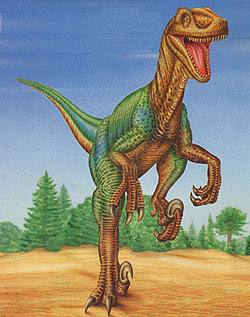 Figure 45.46
The most successful terrestrial vertebrates. This Deinonychus, had one of the largest brain for body size of any dinosaur, was a highly effective predator, and killed its prey with a large razor-sharp claw on its rear feet.Dinosaurs are the most successful of all terrestrial vertebrates (figure 45.46). They dominated life on land for 150 million years, an almost unimaginably long time—for comparison, humans have been on earth only 1 million years. During their long history, dinosaurs changed a great deal, because the world they lived in changed—the worldÕs continents moved, radically altering the earth’s climates. Thus we cannot study dinosaurs as if they were a particular kind of animal, describing one “type” that is representative of the group. Rather, we have to look at dinosaurs more as a “story”, a long parade of change and adaptation.In this overview, we will examine a variety of very different kinds of dinosaurs, animals that lived at different times, adapted to very different worlds. First, we will trace the history of the dinosaurs, and try to get a sense of the evolutionary forces that so changed the dinosaurs as they evolved.